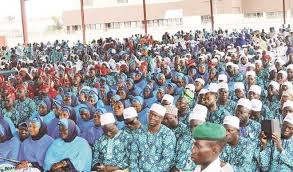 Osun State Pilgrims during enlightenment prgramme
By Muhammad Ajah
The onerous task of educating the Nigerian pilgrims on what it takes to attain accepted Hajj – Hajj mabrur – is one that the National Hajj Commission of Nigeria (NAHCON) battles with every year. This is in consideration of the fact that over 80 percent of pilgrims for every year’s Hajj comes from the rural dwellers who are also first-timers. Additionally, most of these pilgrims are not well-read or read at all, thus are not abreast with modern environments and facilities. Again, some of them are not conversant with the religious dynamism and therefore stuck between the extremist in their creed and the interwoven with ethno-cultural colorations. .
The education and enlightenment programmes improved upon from year to year for the intending pilgrims have become more herculean but impressive. For 2017 Hajj, NAHCON has made it one of the compulsory criteria to qualify a pilgrim. The commission has made it all-year-round activities which must be carried out by the state agencies and tour operator companies starting from the end of every Hajj exercise. By this, any intending pilgrim for subsequent Hajj must enroll into the training programmes of state of choice even before fully paying the Hajj fare because it is believed that every Muslim is a potential pilgrim to the Holy Land of Makkah.
With the new policy aimed at ensuring that pilgrims are properly trained for the spiritual journey, the commission tasks its zonal coordinators to monitor every state under them and report periodically to the national headquarters. And with the 2017 Hajj barely four months away, many states have concluded or nearly concluded all training requirements for the pilgrims, though the challenge often lies with the government-sponsored pilgrims who feel untouchable. States such as Kano, Kaduna, Niger, Sokoto, Kebbi, Oyo, Bauchi, Kwara, FCT Abuja, Edo, Katsina, Osun and a few more are states to reckon in the full compliance to pilgrims’ orientation programmes.
But for NAHCON, any report of deficiency from pilgrim can attract disqualification even at the point of boarding the aircraft. The policy is to further guard the image of Nigeria in Saudi Arabia which is more valuable than any wrong impression any pilgrim could create while in the Kingdom. It is noteworthy that in the past decade, the Saudis have been commending Nigeria for its steady improvement in pilgrims’ conduct and Hajj management.
For the 2017 Hajj, NAHCON rolled out practical steps for implementation by the stakeholders especially the state boards and tour operators. They are: one, mobile cinema on Hajj at reception centers. Films on practical Hajj experiences are demonstrated to guide the pilgrims on what to meet in Saudi Arabia.  After the film show, questions and answer session would follow. Suggestions would be collated from the viewers to engage the people in discussion for further enlightenment. Village heads, imams and Hajj administrators can also further the programme in their houses or Islamiyyah schools for women within given timeline.
Secondly, public enlightenment units would be held in the local government areas. Local governments should establish their permanent agencies to engage in public enlightenment throughout the year on Hajj rites and operations, including the use of film shows at villages. Thirdly, newsletters are issued by NAHCON on regular basis. NAHCON has programmes aired on the National Television Authority (NTA) on all aspects of Hajj. Fourthly, NAHCON expects to hold regular seminars with stakeholders and Hajj officials state by state.  By the time this finally kicks off, press conferences and parleys with the general public to listen to complaints and suggestions would be held.
In addition, there are a lot of radio/telephone programmes conducted by state boards in their local languages. In some states, phone-in programme are conducted in some of their stations e.g. hannu-da-yawa to discuss Hajj matters with the public. Jingles, talk shows, discussions, questions and answers on Hajj, documentaries on radio in English, pidgin and local languages are held.
NAHCON expects to embark on advocacy programmes with all states and agencies in such wise that the ulama who conduct radio programmes are approached to read NAHCON’s messages.  This can most especially be during the tafsir sessions in Ramadan. All non-political gatherings including women fora are explored.
States are expected to explore quiz and essay competitions as a way to general public enlightenment on Hajj with winners rewarded with Hajj seats as pilgrims’ assistants. States should also embark on media campaign with handbills, booklets, features, advertorials and slogans in local newspapers. However, in all these campaigns, states and agencies should utilize experts to speak on health, social and spiritual matters of Hajj. The national ulama team on Hajj must be directly involved in the full implementation of these laudable education and enlightenment programmes for the Nigerian pilgrims especially in their respective areas in Nigeria.
For effective results, the media unit of NAHCON should be saddled not just with its normal public relations activities but also take the initiative of Hajj enlightenment campaign as a duty throughout the year and intensify it as each Hajj season approaches.
Muhammad Ajah is an advocate of humanity, peace and good governance in Abuja. E-mailmobahawwah@yahoo.co.uk.