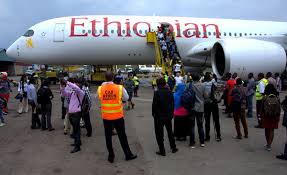 House of Representatives on Wednesday mandated its Committee on Aviation to invite the Minister of Aviation, Nigeria Civil Aviation Authority (NCAA) and Ethiopian Airlines over undue delay in the airlifting of Muslim pilgrims to Saudi Arabia.
The resolution was passed following the adoption of a motion on the complaints leveled against Ethiopian Airlines, which was sponsored by Zakari Mohammed (APC-Kwara).
The lawmaker who called for the House intervention, frowned at the recent excessive delays and disrespectful behavior towards Nigerians and other nationals from Saudi Arabia to Nigeria by Ethiopian Airlines.
In his lead debate, Mohammed noted that Ethiopian Airlines due to the backlog of delays, have left Nigerians stranded in Jeddah for over one week with most running out of funds to survive.
He expressed worry at the airline’s refusal to offer a reasonable explanation for the delay in violation of Article 2 of Ethiopian Airlines passenger commitment and made reservations for three persons to occupy one hotel room in overnight delays again, in violation of Article 11 of the Ethiopian Airlines passenger commitment published on their website.
According to him, due to the inconveniences caused by the airline, passengers had to incur more expenses by making hotel reservations for themselves.
He added that over one thousand Nigerians who were due to be back in the country on 27 June, 2017 were stranded in Jeddah for four to five days.
To this end, the House mandated Ethiopian Airlines to apologize to the affected passengers through two national dailies.
The House also resolved that the airline should offer flight delay compensation to affected passengers according to global aviation rules.
Business Day
Hajj News