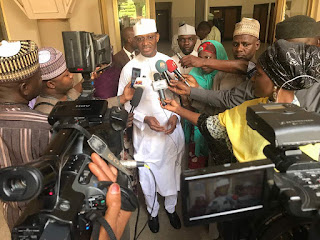 The Muslim Wing of the Niger state Pilgrims Welfare Board has refunded over N29 million to the treasury of the state government.
The money is part of the unspent allocation to the commission for the 2018 Hajj operation.
ADVERTISEMENT
Alhaji Abubakar Magaji, the Amirul Hajj, disclosed this while presenting the report of 2018 hajj to Gov. Abubakar Bello of Niger in Minna on Wednesday.
He said that 3,058 out of the 3,946 pilgrims that paid for the hajj spaces allocated to the state by National Hajj Commission of Nigeria (NAHCON) successfully performed the 2018 hajj.
ADVERTISEMENT
Magaji disclosed that two pilgrims from the state lost their lives, one inside an elevator in Saudi Arabia and the other died on his way back home in a road accident.
Also, Rev. El-Smaila Yerima, Chairman of Christian Pilgrims Welfare Board in the state, described the 2018 Christian pilgrimage as “smooth and successful with zero cases of absconding.
He said that 220 pilgrims performed the 2018 Christian pilgrimage in Jerusalem out of the 293.
Yerima said that 23 persons were denied visa, while another 10 were disqualified based on their age and 40 were rescheduled to go during Easter period.
He appealed to the state government to sponsor more people to subsequent pilgrimage for greater participation.
Responding, Gov. Bello commended the state pilgrims welfare board for successfully conducting the 2018 pilgrimage without hitches.
He described the refund of N29 million by the Muslim wing of the state pilgrims board as being the first time in the history of the state and commended the leadership for being prudent in their expenditure.
The governor said that the state government might no longer be able to sponsor people for pilgrimage due to its limited resources. (NAN)
Daily Trust