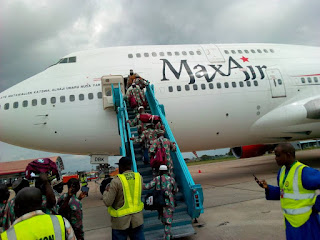 As preparations for 2019 Hajj begin, National Hajj Commission of Nigeria, NAHCON, has conducted a formal opening of application forms and screening of air carriers for 2019 Hajj airlifts. The event which was at the Stonehedge Hotel, Abuja last Tuesday, inaugurated a 32-man screening committee saddled with the responsibility of assessing the applicants in order to select suitable passenger air carriers as well as cargo freighters for 2019 Hajj season.
The Committee, chaired by NAHCON’s Commissioner for Operations has its members drawn from aviation agencies, financial crimes institutions, customs, office of the Secretary to Government of the Federation, NAHCON Board members and representatives of Chief Executives of State Pilgrims’ Welfare Boards. In his opening remarks, NAHCON’s Chief Executive Officer and Chairman, Barr. Abdullahi Mukhtar Muhammad reminded the members that their job is a trust on behalf of pilgrims who will bear the consequences of the committee’s final decisions.
Therefore, they were admonished to insist on the best services on behalf of the pilgrims. He also advised them to remain guided by the criteria put together by different sister sectors of government in determining those carriers that will qualify for the slots. Barrister Muhammad congratulated the air carriers for declaring interest to participate in airlifting Nigerian pilgrims to Saudi Arabia, and urged them to take in good faith the outcome of the screening exercise. As for those who will scale through the screening, NAHCON’s chairman called on them to explore the possibility of doing business with Private Tour Operators in conveying their pilgrims numbering up to 20,000. Doing this, he believes, will reduce the hitches experienced yearly from that sector. Others who spoke at the occasion included representatives of chairpersons, Senate and House Committees on Foreign Affairs; Senator Monsurat Sunmonu and Hon. Nnenna Ijeoma Elendu Ukeje respectively. About seven air carriers applied for the 2019 Hajj airlift exercise and the screening is already in progress.
vanguard