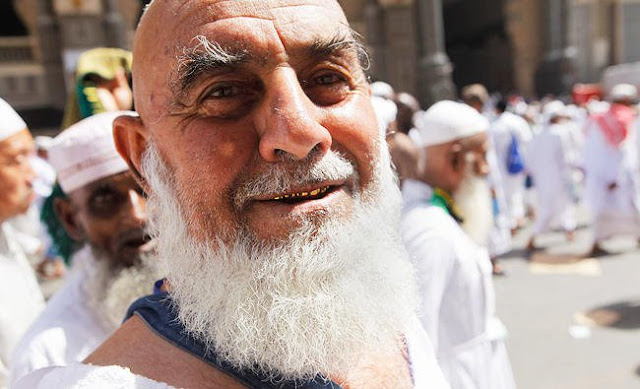 Mohammed Akhmetov, 71, a Muslim pilgrim from Kazakhstan who is performing the hajj for the first time, poses for a photograph as he leaves the Grand Mosque in the Muslim holy city of Makkah, Saudi Arabia, in this file photo taken on Oct. 11, 2013. (AP)
An estimated 2,500 Kazakh pilgrims will arrive in the Kingdom to perform Haj this year, Kazakhtan’s Consul General in Jeddah Madiyar Ismailov told Arab News on Sunday.

The Kazakh Haj mission will be the coordinating center for the Haj organization issues of Kazakhstani pilgrims. The mission will comprise officials from the Kazakh Religious Authority Muftiyat, the newly established Ministry of Religious Affairs and Civil Society, the Ministry of Health and several travel agencies.

He said the number of pilgrims is smaller this year compared to the 3,000 who performed Haj in 2016 due to the global economic and financial constraints.

He noted pilgrims pay for everything in connection with their Haj performance including plane tickets, transportation facilities, accommodation and food, among other expenses. He said that a delegation came to the Kingdom last month to meet with Saudi authorities to discuss Kazakh pilgrims’ travel. He added the delegation signed this year’s agreement for Kazakh pilgrims’ Haj performance and expressed appreciation for the preparations made by the Kingdom.