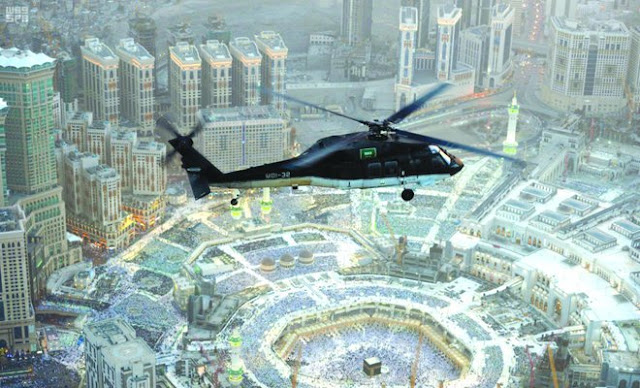 A helicopter patrols above the Grand Mosque for the security and safety of pilgrims. (SPA)
About 8 million pilgrims using about 30,000 vehicles were transported to and from the Grand Mosque during the first eight days of Ramadan, the Makkah Governate announced Sunday.

The number of pilgrims given transportation was a sharp increase over the same period in 2016. An estimated 5.3 million pilgrims in 22,000 vehicles were transported during the 2016 Ramadan.

The transport plan approved by Makkah Gov. Prince Khaled Al-Faisal has resulted in the success of transporting the passengers.
Procedures for the transfer of pilgrims to and from the Grand Mosque are covered by the transport plan.

In order to implement the plan, the density of public transport and the movement of crowds were distributed to all geographical directions surrounding the Grand Mosque, as well as allocating shaded pedestrian paths that are separated from vehicle routes.

An estimated 35 million passengers are expected to be transported to the Grand Mosque during Ramadan.