December 08, 2022
Home Global A fable for the faithful: How a manual scavenger went on Hajj 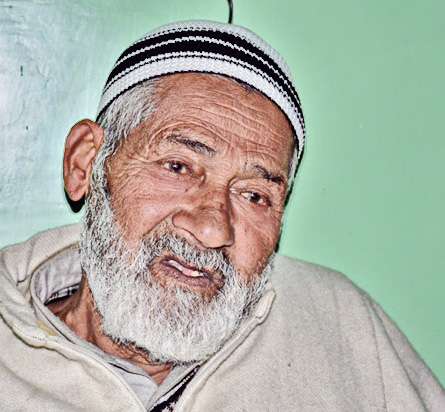 A rich Muslim can easily afford Hajj, and because of his wealth, he is absolutfely required to do Hajj. A poor Muslim can only dream of going on Hajj, and often dies with the dream still lingering in his eyes.

The story of Haji Ghulam Mohiuddin Sheikh, popularly known as Mahad Sheikh, a resident of Arampora in Sopore, is an exception. His journey to Hajj is an inspiration to the people of Sopore, and it has become a fable for the faithful, who see in it the miraculous ways of God.

Mahad Sheikh, who is almost 80 years old now, was a sweeper employed by the Sopore municipality. His salary used to be 60 rupees a month. Hajj was for him a distant, impossible dream. But three years after his retirement, he unexpectedly found himself on the journey to Makkah.

“I was appointed as a municipality sweeper very late in my age. I did the job for fourteen years, and then I was retired. My financial condition remained poor. I had to take care of four daughters and a son. Even when I had the municipality job, I used to work in private capacity as a cleaner of toilets. I would dispose human excreta and get for this work five or ten rupees from every home. I did this work throughout my life,” Mahad Sheikh told Kashmir Reader.

“I never thought I would one day visit the holy land of Muslims. After my retirement in the year 2000, I continued to work privately to wash the toilets of my neighbours, relatives, friends and other residents of Sopore. I never felt ashamed of my job. It was a kind of worship for me. It paid me an unexpected gift. I was able to go on Hajj,” Sheikh said with pride.

“Once I went to Baramulla town in 2003, to get some certificates from the Deputy Commissioner’s office. When I reached the office, I saw a huge gathering there. They were people who had come to submit their application for Hajj. The urge to go on Hajj came over me and I went to the peon and asked him to write an application for me. He laughed at me; he thought I was a madman. But I persisted, and to get rid of me he wrote an application. I took the application to the DC who was a non-Kashmiri, and told him that I wanted to go on Hajj. To my surprise, he marked my application and told a staffer to put it in the file of the Hajj applications. I didn’t fill up any other form. While returning home, I withdrew an amount of Rs 10,500 that was all my savings and the money I had received on my retirement. I took the money to a Sopore bank and submitted it in the account for Hajj applicants,” Sheikh recounted.

Nazir Sheikh, Mahad Sheikh’s son, told Kashmir Reader that the family was shocked at hearing that the old man had withdrawn all his savings and submitted them in a bank for purposes of Hajj. “Next day, early in the morning, I went to the Divisional Commissioner’s office to at least get the money back, but to my surprise I was informed that my father’s application had been accepted. He was going on Hajj in a group of five people! The other groups were all of four persons,” Nazir recalled.

“When my father was leaving, the people of Sopore gave him a grand farewell with a large procession following behind him, chanting Islamic slogans. It was a day that no one in Sopore has forgotten,” Nazir said.

While his son recounted his father’s journey, Mahad Sheikh sitting in a corner of a room smiled and said, “I hadn’t planned to go on Hajj. I think when I saw those people at the DC office, my heart cried and I wanted to be among them. It was Allah who called me to the holy land.”

Nazir said, “When he returned, he had brought dates and holy water, and biscuits, wrappers of food packets, and some currency which he never let us change.”
Mahad Sheikh, who quit his work of cleaning toilets three years ago, is ill and infirm now. He spends his day roaming the Sopore streets and wherever he hears the call for prayers, he presents himself in the service of Allah.
Source: Kashmir Reader