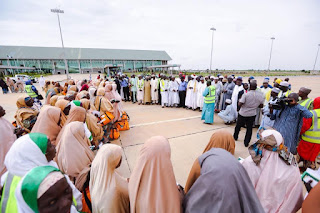 The National Hajj Commission of Nigeria (NAHCON) has said the discontinuation of dollar concession by President Muhammadu Buhari had saved the nation of N75 billion.
The Head, Public Affairs Division, Fatima Usara, at a media parley on the organisation’s stewardship in Abuja, added that the abolition of hajj sponsorship by the Federal Government had also enabled the country save N1.6 billion yearly since 2015.
She noted that in 2017, NAHCON, with the support of the central administration, introduced direct accommodation negations with hotel owners in Medina and Makkah, thereby eliminating agents and saving over $14 million.
The spokesperson further disclosed that in 2018, N229 million was saved through querying of local fees imposed on pilgrims by the various state pilgrims welfare boards, agencies and commissions.
She added that as part of efforts to contain fraud in the payment of Hadaya (Ram Sacrifice), Jaiz Bank and the Islamic Development Bank had assigned for the job.
Guardian