The Saudi Press Agency stated yesterday, Saturday, that the Kingdom will gradually receive requests for Umrah from abroad, starting tomorrow, Monday, the ninth of this August, “with a capacity of up to 60,000 #pilgrims, distributed over 8 operational periods, to reach the capacity of two million pilgrims per month.”

The #Hajj and #Umrah authorities in #Saudi Arabia had prevented the arrival of pilgrims from outside the Kingdom nearly a year and a half ago due to the outbreak of the Corona virus pandemic around the world.

And Saudi Arabia reopened Umrah last October to residents in the Kingdom, after it was completely suspended during the outbreak of the Corona pandemic.

Abdul-Fattah bin Suleiman Mashat, the Saudi Deputy Minister of Hajj and Umrah, said that those requesting to perform Umrah will have to submit a certificate stating that they have obtained the protective vaccination against “Covid-19”.

Regarding the health protocols for pilgrims from inside the Kingdom, Mashat explained that immunization will be a prerequisite for performing Umrah, praying in the Grand Mosque, and visiting the Prophet’s Mosque, as shown by the “Tawakulna” application for the three immunization categories (immunized with two doses of the Corona vaccine, or a vaccinator who spent 14 days after Receiving the first dose of the vaccine, or an immunized person recovering from infection) for all immunized age groups for the pilgrims inside.

The Ministry of Hajj and Umrah: Raising the capacity of pilgrims, starting from the first of Muharram, to 2 million pilgrims per month.

As for the pilgrims abroad, a certificate of immunization approved by the official authorities in the country of the pilgrim must be attached within the justifications for requesting the performance of the rituals, with the condition that the vaccines be approved in the Kingdom, in addition to an acknowledgment of the correctness of the information and adherence to the institutional quarantine procedures for the entry of travelers coming to the Kingdom from countries, which are not The suspension of direct entry to the Kingdom continues.

With regard to transporting domestic pilgrims, the Saudi Deputy Minister of Hajj and Umrah stated that the number of passengers in the bus will not exceed 50% of the bus’s capacity, while maintaining a safe distance inside the bus, providing sterilizers, and ensuring the permits of pilgrims from inside the Kingdom issued from the “Umrahna” and “Umrahna” applications. “Tawakulna” before getting on the bus.

It is noteworthy that Saudi Arabia restricted the performance of Hajj rituals last month to citizens and residents of the Kingdom for the second year in a row, due to the continuing spread of Hajj in the world. 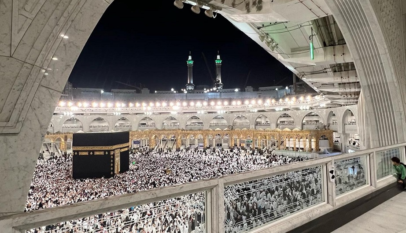