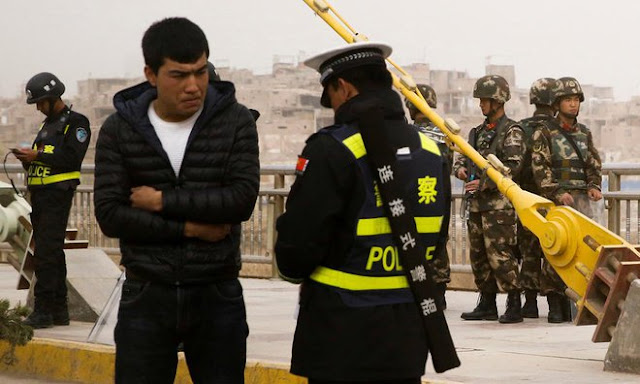 A police officer checks the identity card of a man as security forces keep watch in a street in Kashgar, Xinjiang Uighur Autonomous Region, China, on March 24, 2017. (REUTERS/Thomas Peter)
Authorities in China’s restive Xinjiang region have punished a local official for declining to smoke in front of Muslim elders, seeing that as a sign he was insufficiently committed to the region’s fight against religious extremism, according to a government report and state media Tuesday
.
Jelil Matniyaz, Communist Party head of a village in Hotan Prefecture, was demoted for “not daring” to smoke in front of religious figures, said the report, issued Saturday and reproduced by official newspapers and websites. Matniyaz, identified as a member of Xinjiang’s indigenous Uighur ethnic minority, was cited by the report as not having a “resolute political stance.”

The state-run Global Times newspaper on Tuesday quoted other local officials as saying that government leaders should push back against rather than comply with religious prohibitions against smoking to demonstrate their “commitment to secularization.”

The punishment appears to be the latest extreme measure by the authorities to exert their will in Xinjiang, particularly its southern portion including Hotan where Uighur culture is strongest. Chinese authorities and the state-controlled media have increasingly equated religious expression with extremism in their official rhetoric, partly in response to a bloody insurgency blamed on Uighur Islamic militants.

The government has argued that its measures, such as prohibiting women from wearing Islamic veils or men from growing beards, are part of an effort to roll back dangerous religious fundamentalism. Overseas Uighur advocate groups say the restrictions have only increased resentment over heavy-handed Chinese rule and fueled a cycle of radicalization and violence.

Although smoking is not strictly forbidden in many parts of the Muslim world, it is sometimes discouraged by the more religiously observant. Ironically, Matniyaz’s punishment comes as health officials are seeking to curb a deeply ingrained smoking culture in China, where about half of all males regularly light up.

The Hotan Daily newspaper said a total of 97 local officials were censured as part of a Communist Party investigation into the conduct of its own members. The report indicated the probe was personally directed by Chen Quanguo, the Xinjiang’s regional Communist Party leader and highest ranking official, who has vowed to crack down on extremism.

Chen was transferred to Xinjiang in August from Tibet, another region whose non-ethnic Chinese residents have long lived under social, political and religious restrictions far more severe than in other parts of the country.

In recent months Chen has ratcheted up security measures and sent phalanxes of armed paramilitary police and armored tanks rumbling through Hotan’s streets in large-scale displays of force.

An ancient stop on the Silk Road, Hotan and its surrounding region have seen an uptick in violence in recent years. State media reported that a car rammed into a Communist Party building in December and blew up, resulting in one dead. Months later, eight people died in a knife attack in a different part of Hotan.
Arab News