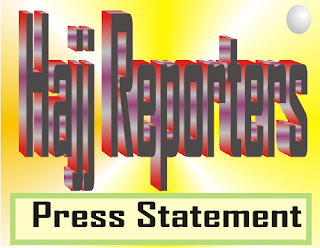 “Civil Society Applauds Increase in Hajj Seat Quota”
Independent Hajj Reporters, a civil society organisation has lauded the decision of Saudi Arabia to restore the 20% cut in Hajj quota to all hajj participating countries.
This was contained in a statement signed by its national coordinator, Ibrahim Muhammed.
The statement said “we lauded the decision of Saudi Ministry of Hajj to return the 20% cut in Hajj quota in the last five years.”
According to Saudi Gazette Newspaper “Saudi Arabia has decided to lift from this year the reduction in the quota of Haj pilgrims imposed five years ago. It said the higher authorities approved a proposal by Crown Prince Muhammad Bin Naif, deputy premier and minister of interior who is also chairman of the Supreme Haj Committee, to restore the pilgrimage quota that existed prior to the cuts”.
“Saudi Authorities had in 2013 imposed a 20 percent cut in the quota for foreign pilgrims, and a 50 percent cut for domestic pilgrims, to ensure safety during the expansion of the Grand Mosque. Though it said that 20% cut will be gradually increased in a phased manner. Last year, 1,325,372 foreign and 537,537 domestic pilgrims performed Haj, making a total of 1,862,909 pilgrims which is the lowest in the last ten years of hajj exercise.”
The statement said “Though the reason for the temporary cut in hajj quota was meant to expand the two Holly Mosques for the comfort of pilgrims, nevertheless, the reduction greatly affected the chance of Muslims who wants to fulfill their religious obligations. Nigeria hajj quota seat was slashed from 95,000 to 76, 000, while India quota was trimmed from 170,000 to 136, 000 within the same period. Indonesia, who has the largest numbers of pilgrims, saw their allocation reduced from 211, 000 to 168, 800.”
“With this development, Nigerian Muslims will have more opportunity to secure hajj seat to fulfill their religious obligations. It will also compress the pressure of trying to secure hajj seats through the back door, and close avenue of possible hajj seat racketeering.”
However, the group advise “NAHCON to give priority to states with higher demands, those that meet its recently capacity verifications exercise and first timers.  It also urges “NAHCON, SMPWBs and Tour Operators to double their efforts in anticipation of the new increase in numbers of pilgrims.” This new development calls for more commitments from stakeholders and hajj service providers.
Signed
Independent Hajj Reporters
Nigeria.