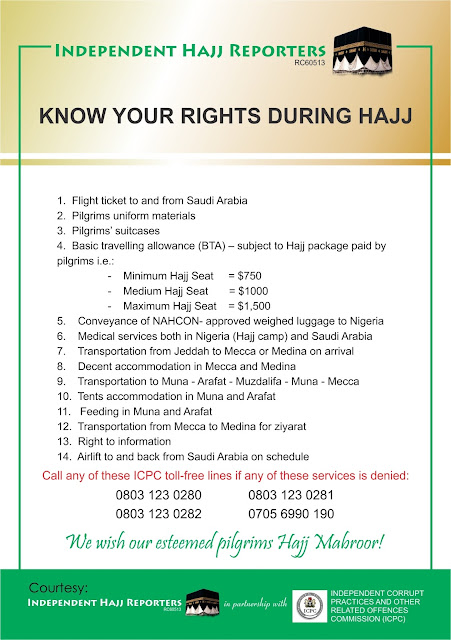 Hajj Reporters
Independent Hajj Reporters has concluded plans to partner with Independent Corrupt Practices and Other Related Offences Commission ( ICPC) to investigate the status of refunds made to State Muslims Pilgrims Welfare Boards and Agencies between 2012 and 2016
A statement signed by the civil society’s national coordinator Ibrahim Muhammed and publicity secretary, Abubakar Mahmoud, Sunday said  the refusal of some state pilgrims agencies to disburse the funds is unacceptable.
“We view with serious concern the refusal of some state Muslim pilgrims welfare boards to disburse refunds for service not rendered to pilgrims despite the fact that such money has been in their custody for three to four years. The refunds which are in hundreds of millions  naira range from feeding refunds, flight ticket, and other services paid by pilgrims but did not yet enjoy such services,” the statement said.
Since 2012 the National Hajj Commission of Nigeria (NAHCON) has been making refunds to states pilgrims’ welfare boards and agencies for onward distribution to pilgrims for service not rendered by hajj service providers.
The publicity that accompanied the 2015 refunds of N1.8 billion by NAHCON later force some states to begin the disbursement of some refunds to their pilgrims.
“In view of the above, Independent Hajj Reporters has concluded arrangement to partner with ICPC with the aim of investigating states that are yet to refunds all the money meant for pilgrims between 2012 and 2016,” the NGO which monitors hajj activities in Nigeria and Saudi Arabia, said.
“It is noteworthy that pilgrims paid for virtually all services they enjoy during the holy pilgrimage. It is questionable why will States Pilgrims Boards denied their pilgrims of their right even when NAHCON has been able to compel  Saudi based hajj service providers to refund money for services not rendered.
Hajj News