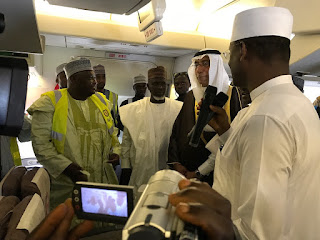 The Independent Hajj Reporters has called the establishment of microfinance banks for hajj, as well as a new policy that will allow civil servants that intend to perform Hajj to use their pension funds to pay for the pilgrimage.
This was contained in a statement signed by its national coordinator, Ibrahim Muhammad, and publicity secretary, Abubakar Mahmoud.
“Due to a global increase in the cost of hajj expenditures, several countries have now resorted to adopting a system that allows their citizens to pool resources together in order to ease financial obligations of Hajj as opposed to on spot payments. Some of the procedures allow intending pilgrims to use part of their savings to augment payment for the cost of Hajj,” the statement said.
The civil society that monitors hajj activities in Nigeria and Saudi Arabia also called for the establishment of hajj microfinance banks, as well as periodic deduction of hajj funds from monthly earning of consented government workers to pay for hajj seats.
“Having review the financial challenges faced by average Nigeria civil servants in paying for hajj seats, we therefore urged NAHCON to partner with the Nigeria Pension Commission (PenCom) to create a policy architecture that will allow civil servants who wish to perform Hajj from their pension funds to do so,” the civil society said.
The statement said such policies should be incorporated into the proposed hajj saving schemes that will integrate legally established financial institutions in the country.
Daily Trust