The decision of Saudi Arabia to suspend foreign pilgrims from participating in Hajj 2021 has received the support of some medical experts from the Nigeria Hajj industry.

The Saudi Ministry of Hajj and Umrah cancelled this year’s Hajj for foreign pilgrims due to the COVID-19 pandemic.

Reacting to the development, the NAHCON Commissioner in charge of Health, Hajiya Zainab Ujudud Shariff, commended the Kingdom of Saudi Arabia for taking such decision to control and safeguard the health of pilgrims.

However, the NAHCON Commissioner called for more collaboration between NAHCON and the Ministry of Health for result oriented policies and implementation.

“A situation where NAHCON and States Muslim Pilgrims Boards will hold an operational meeting without the involvement of Commissioner in charge of Health at the commission will not be good for Hajj operations, especially within this COVID-19 pandemic,” she said.

Dr Kana Ibrahim, the former Head of Medical Team and Commissioner Representing Federal Ministry of Health before the current board, opined that Saudi took a good decision on behalf of the entire world, saying COVID-19 has proved to be dangerous, evasive and lethal with great potential for mutation. 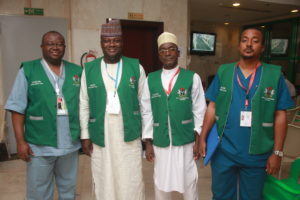 Aside his wide experience on Hajj medical affairs, Dr Ibrahim Kana, who has attended fellowship on Mass gathering in the Kingdom of Saudi, said the decision to suspend foreign pilgrims by the Kingdom is in order because cases of new variants especially from Asian countries has been reported and that “allowing people from any of those countries will be careless on the part of Saudi health authorities”.

Speaking with HAJJ REPORTERS, a Consultant Orthopaedic Surgeon and Public Health Physician, Dr Musiliu Kolawole Odunola said the “decision to ban foreign nationals is painful but it is a good and wise decision.

According to him, “the global coronavirus pandemic is still a potential threat despite recent advancement in prevention through vaccination and the WHO protocol for large gathering.

Dr Kolawole Odunola, who is also a member of NAHCON adhoc medical team for years, said: “Hajj is a large gathering of various nationals, despite the protocols put in place managing outbreak during the Hajj could be difficult and overwhelming in terms of care.”

“The Kumbh Mela gathering in India is a vivid example that led to the upsurge with over 414 thousand new cases with 4000 deaths daily. This is made worst because the pilgrims in India flouted the COVID-19 protocols put in place. Infectious diseases spread fast in such situations.

“Saudi Arabia decisions to limit Hajj only to residents of the kingdom is multifactorial. Major reason is risk of spread and potentially deadly strains of the virus in parts of Europe, Asia and South Africa.

“The current medical facilities are not enough to manage outbreaks but in terms of medical personnel, drugs, ventilators and the economic cost of care knowing that medical treatment is free for Hujjaj”.

Preparedness for large gatherings in the current Global Coronavirus pandemic may take a few more years; at least two to three years to understand the dynamics of level of preparedness, he explained.

Other members of the NAHCON Ad hoc medical team Committee, like Dr Bello Abdulkadir Salanken Zazzau, Consultant Physician; Dr Usman Galadima and Dr Maikore of Ministry of Health who was the Head of Data and Surveillance, also applauded the decision of the Kingdom of Saudi Arabia.