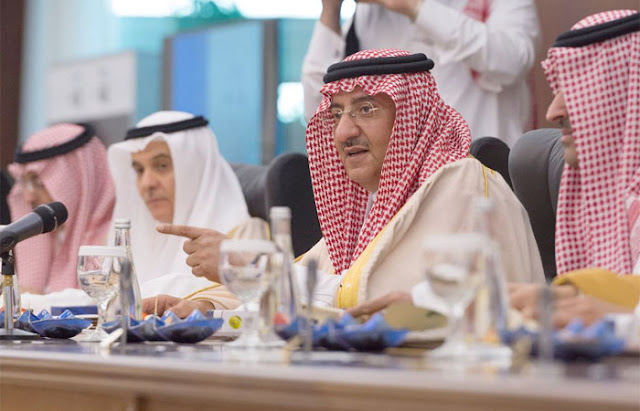 Crown Prince Muhammad Bin Naif, deputy premier, interior minister and the chairman of the Supreme Haj Committee, will open in Madinah on Wednesday the 17th symposium on Haj and Umrah.
The symposium will be organized at Taibah University by the Makkah-based Umm Al-Qura University.
Rector of Umm Al-Qura University, Bakri Assas, who is also the dean of the center of the Custodian of the Two Holy Mosques for Haj and Umrah researches, lauded the excellent services being provided to guests of Allah.
“The Kingdom has deployed all its human and technological potential in the service of pilgrims and visitors,” he told local daily Al-Madina on Sunday.
Dean of the center Sami Barhameen said the scientific committee of the seminar has approved 112 out of 269 research papers to be discussed at the annual symposium.
He said the research papers will be discussed in eight sessions, 46 papers every day. “All the papers have been thoroughly checked, evaluated and endorsed by the scientific committee according to the international standards,” he said.
Bahrameen said the symposium will focus on a number of themes including Haj Fiqh (jurisprudence), issues pertaining to Umrah, crowd management, economy, architecture, environment, health, media, technology and its applications and the impact of new projects and initiatives in the promotion of Haj services.
He said the symposium will also discuss the participation of the public in serving pilgrims and visitors to Madinah.
Saudi Gazette report