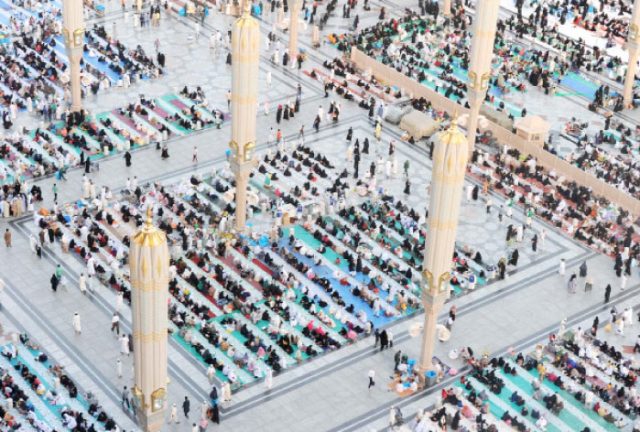 Visitors waiting to break their fast at the Prophet’s Mosque in Madinah. — SPA
Security plans have been completed for the 27th night of Ramadan and for the night when the Holy Qur’an is completed during Taraweeh prayers, according to Commander of the Emergency Forces for the Madinah region Colonel Bajad Bin Majid Al-Harbi.
He told Al-Madina Arabic daily that Special Emergency Forces are doubling their efforts to provide the necessary security to visitors and worshipers and to organize and manage the crowd in the areas around the Prophet’s mosque.
“Our intensive plans for the two nights that witness a large number of people in the Two Holy Mosques include the maintenance of pedestrian corridors in the areas surrounding the Prophet’s Mosque and the prevention of squatting or praying in these spaces to guarantee the smooth flow of worshipers,” he said.
He said that elaborate plans have also been made for Eid prayers.
“The focal point for the crowds on the day of Eid is the Salam gate. The Presidency for the Affairs of the Prophet’s Mosque is working with us to make sure that operations are implemented successfully guaranteeing the safety and security of all visitors,” Colonel Al-Harbi said.
Saudi Gazette