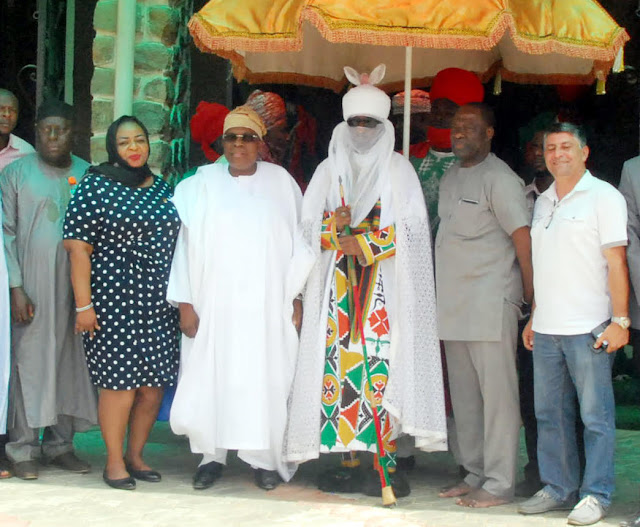 From left: Alhaji Abu Aminu Alidu, Station Manager, SAHCOL; Mrs Senanu Ladipo, Relationship Manager, First Bank; Alhaji Muneer Bankole, Managing Director, Med-View Airline; His Highness  Alhaji Muhammad Sanusi II, The  Emir of Kano; Captain Usman Saleh and Mr Jalal Ammouri, Director, Med-View Airline during a reception for Med-View Airline team by the Emir of Kano in his palace to felicitate with the Airline on its Lagos-Kano inaugural flight on Wednesday.
Hajj Reporters
Med-View Airline launched its first flight operations to Kano State on Wednesday, triggering commendations from Emir of Kano, Muhammad Sanusi, II.
The Emir, while playing host to the management of the airline led by the Managing Director/CEO, Alhaji Muneer Bankole after the inaugural flight landed in Kano on Wednesday  “praised the management of the airline for the bold step in operating to the state.
He said ”the commencement of flight operations to Kano, the Centre of Commerce, would further aid the development of the state”.
He however advised the people of Kano to patronize Med-View Airline as well as other airlines that are committed to fly into Kano.
“I am happy Med-View Airline is coming to Kano. I hope their services will be patronised by Kano people. Kano, being the center of commerce, will help to provide customers for the airline”, the Emir said.
“He appealed to the airline to dedicate wide body aircraft for the lesser hajj in and out of Kano for the comfort of pilgrims”.
Earlier, Alhaji Bankole said Kano being the Centre of Commerce requires more air connectivity. He said the flight would left Lagos by 6:50 a.m and arrived Kano by 8:10 am. Other flights to be operated to and from Kano, according to the airline, are Kano-Kaduna; Kaduna-Lagos, Lagos-Kaduna; Kaduna-Kano and Kano-Lagos.
Bankole said, “Kano is the Home of Commerce. We are grateful to be here again. We operate into Jeddah. We depart Lagos, come to Kano and we head on to Jeddah. Kano to Jeddah is about 4 hours 15 minutes. It makes all Nigerians to be comfortable and stress-free. It is easier than going with Ethiopian Airline to Saudi Arabia, just like the Highness said. In that case, you have to get down in Addis Ababa before getting to Jeddah.
“The two daily flights were scheduled in such a way that one operates direct from Lagos to Kano, while the other is routed through Kaduna”.
The afternoon flight at 12.30 PM from Lagos will be routed via Kaduna to give passengers transiting Kano the opportunity to connect their flights to foreign destinations such as Jeddah and Dubai.
The addition of Kano had brought Medview Airline domestic routes to eight including Lagos, Abuja, Port Harcourt, Enugu, Kaduna, Yola and Maiduguri.