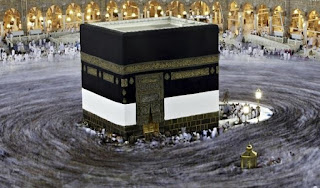 The FCT Muslim Pilgrims Welfare Board is to commence the registration of its intending pilgrims for the 2017 hajj on Monday 16th of January, 2017 across the six area councils of the territory.

The Spokesman of the board Muhammad Lawal Aliyu said in a statement on Sunday that intending pilgrims who wish to perform the pilgrimage through the board are to present a bank draft of minimum of N1000000 (One million Naira) only, payable to the FCT Muslim Pilgrims Welfare Board, Abuja and their International Passports to book for a seat.


The board would not entertain payment by proxy and bulk purchase of the forms by individual for the exercise,” Aliyu said.
“Similarly, all intending pilgrims must be guaranteed by chief Imam of Area Council or Traditional Ruler or a Senior Civil Servant of not less than Grade Level 12 as contained in the Guideline for the registration of 2017 intending Pilgrims by the National Hajj Commission of Nigeria (NAHCON).”
He said female intending Pilgrims would only be registered with their male guide (Muharam) in line with the Saudi Arabian government regulations.
While saying that the board has resolved to register intending pilgrims on first-come first-served basis while first timers would be given priority, he said the Director of the board Malam Muhammad Bashir has warned staff against corruption and any act capable of tarnishing the image of the administration.
When asked if the FCT board N1m directive for intending pilgrims did not negate the resolution of a meeting of NAHCON and State Pilgrims Welfare Boards/Agencies/Commissions (SPWB) for intending pilgrims to deposit a monthly minimum of N250, 000 for four months or N1m once to SPWB, Aliyu told Daily Trust that the registration is just the beginning and that the collection will continue till when the hajj fare would be announced by NAHCON.
“It was suggested by NAHCON to adopt that system of collecting N250, 000 per month from December to April when the hajj fare is expected to be announced. The second aspect of the suggestion is by that April states must have reached N1m deposit. But each states can decide on how best it can collect its money from the pilgrims based on its peculiarity,” he said.
Daily Trust reports that intending pilgrims for 2016 hajj exercise paid minimum fare of N998, 248.92 (with $750 Basic Travel Allowance (BTA), medium fare N1, 047, 498.92 (with $1,000 BTA), and maximum fare N1, 145, 998.92 (with $1,500 BTA) for the northern departure zones.
While pilgrims for the southern departure zones paid, minimum fare N1, 008, 197.42 (with $750 BTA), medium fare (with $1,000 BTA) N1, 057, 447.42 while the maximum fare N1, 155, 947.42 (with $1,500 BTA).

In the name of Allah, Most Merciful, the Bestower of Mercy   All praise is due…