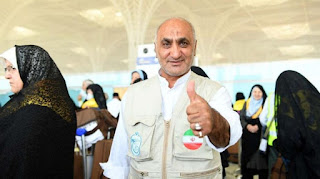 Even as it investigates the P11-million debt, the National Commission on Muslim Filipinos settles the amount to ensure that Filipinos can go to Mecca in August
DAVAO CITY – The National Commission on Muslim Filipinos is investigating suspected fund misuse in the office which reportedly almost got Filipino pilgrims barred from this year’s hajj in Mecca, Saudi Arabia, a ranking NCMF official said.
Dimapuno Alonto Datu Ramos Jr, NCMF Bureau of External Relations director, said NCMF Secretary Saidamen Pangarungan ordered the investigation after learning that the commission had an P11-million debt to Saudi firm Elyas Company, which handled some hajj-related activities for Filipino pilgrims in 2017 and 2018.
The company had filed a complaint against the Philippine government for the unpaid debt.
Datu Ramos said the unpaid debt would have been “enough grounds to block all Philippine pilgrims from joining the hajj until the amount has been fully paid.”
If the debt was not settled, Philippine pilgrims would not be granted visas, he said.
Datu Ramos said Pangarungan only learned about the situation when he assumed his post, and immediately ordered an investigation.
Pangarungan was appointed NCMF secretary in July 2018, but was designated the Amirul Hajj or head of Filipino pilgrims to Mecca this year, only in January.
Ramos said Pangarungan ordered the payment of the debt even while the investigation was still underway to ensure that Filipino pilgrims can go to Mecca in August.
He added that if the final report of the fact-finding committee warrants it, complaints will be filed before the Office of the Ombudsman.
Datu Ramos said initial reports from the investigation suggested fund misuse by some NCMF officials, who even reportedly brought relatives to the hajj using public funds.
He also said Pangarungan was addressing the issue of illegal pilgrims or “muqeem” who obtain fake hajj IDs. Among the preventive measures is the implementaiton of an ID system with QR codes to help spot forged IDs.
Around 7,000 Filipinos go on hajj each year, based on an NCMF report.
Pilgrimage to Mecca is one of Islam’s 5 pillars and it is prescribed for those with the means and health.