January 30, 2023
Home Uncategorized From Snowstorms to sandstorms: Umrah pilgrims arrives in UAE after biking for 15 days

As many as 25 bikers from different parts of Pakistan have stopped over in Sharjah, after riding for 15 days and travelling over 2,500 kilometres

Biking cross-country is not new to Mukaram Tareen, who has been travelling around several countries in Asia for over 30 years. This year, however, Tareen has decided to perform a spiritual trip to Makkah on his bike, in tow with other bikers belonging to his club, Cross Route Club.

As many as 25 bikers from different parts of Pakistan have stopped over at Sharjah after riding for 15 days and travelling over 2,500 kilometres. The bikers are on their way to perform Umrah, with the total estimated trip being 14,000 kilometres long.

They started their journey at Lahore in Pakistan, and entered Iran via the Taftan border crossing. The entourage further proceeded to Bandar Abbas via Bam in Iran to reach Sharjah via ferry. “This place [Sharjah] is beautiful. This is the first time I’ve [been] here. I wish to stay here for [longer], but we have to stick to our itinerary,” said Tareen.

“We were given a grand welcome by the residents of Sharjah. The moment we landed, people here [gave] us fruits, tea, and snacks and many of them even invited us to have dinner and lunch with them,” Tareen added.

After a four-day layover in Sharjah, the bikers will then proceed to the Saudi border through Dubai and Abu Dhabi. “We will then enter the Saudi Arabian border and ride towards Riyadh,” said Tareen.

The group planned the trip in the year 2019, but due to restrictions throughout the world, the trip was not possible. When Tareen proposed the plan to the group, almost everyone was up and ready to undertake it. “We started planning for the trip six months ago. We got in touch with the authorities of the countries we will be travelling in, and sorted out all the documents. We then furnished our route map and the stops we had to undertake,” explained Tareen.

The group has been working out physically, mentally and emotionally for the last six months to prepare for the challenge of being on road for two months. “We ride our bikes for nearly 400 kilometres a day, and try our best to reach our destination before sunset,” said Tareen.

“In the next 10 days, the entourage will reach Makkah and perform Umrah,” added Tareen.

The entourage will make 43 stops in six different countries including Pakistan, Iran, UAE, Saudi Arabia, Jordan and Iraq, before returning back to Pakistan via Iran, covering a total distance of 14,000 kilometres over 60 days. 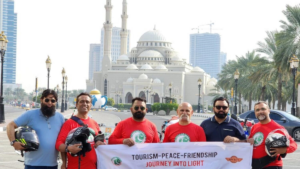 “This is our longest route till date. We want to improve [our] relationship [with] Pakistan with these six countries we are travelling in. We have been meeting a lot of people along the way, and have invited them to visit our homeland and enjoy the beauty of it. And with this journey, we would like to showcase the beauty of the Middle East’s countries to the world via social media platforms,” said Tareen.

The bikers have faced many difficulties while on their way to the UAE, from favourable to extreme weather conditions, to even sandstorms. “We witnessed [a] heavy sandstorm in a desert in Pakistan, and then witnessed snowfall with a visibility of just 10 metres. [We also witnessed] extreme wind in Iran, which made [it] very difficult to ride bikes. However, we faced the challenges, and reached Sharjah,” said Tareen.

The bikers believe that these activities help them remain in shape and healthy. “Biking is a beautiful activity, and the adventure it offers is unmatchable. [Young people] these days are stuck to their gadgets, and we [urge them] to try biking and, in doing so, gain a lot of knowledge about [different] places. Also, biking requires [the] utmost concentration and safety, which should be abided [by] at all times,” said Tareen.

Tareen concluded with a quote by Ibn Batuta. “Travelling; it leaves you speechless, then turns you into a storyteller. Now, we have thousands of stories about the culture, people, and food [of the places we have seen]. We will reach our hometowns enriched.”