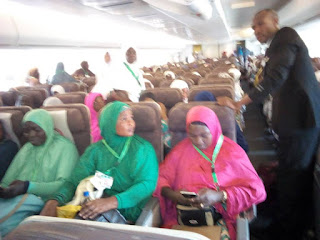 Taraba State Muslim Council has expressed satisfaction with the impressive behaviour of members during the 2018 pilgrimage to Saudi Arabia. The state sponsored 300 pilgrims with N500 million.
Amir-ul Hajj for 2018, Idris Waziri has submitted the year’s report to Governor Darius Ishaku.
Correspondent Owolabi Adenusi reports that governor Darius Ishaku said his government would continue supporting Muslims and Christians to oly lands, believing that such spiritual exposure will influence the behavioral attitude of citizens.
He disclosed that the state spent at least N500 million on the 2018 Hajj exercise, promising to employ two casual staff of the board stationed in
Saudi Arabia into the state civil service cadre.
The 2018 Amir-ul Hajj, Idris Waziri and Chief of Old Muri, Baba Chiroma thanked the governor for supporting Muslims.
The board secretary used the forum to urge Muslims and Christians to desist from playing politics of religion.
He tasked Tarabans to vote credible candidates in the coming governorship and state Assembly polls.
The dream of Ishaku administration is to see a state where citizens will be reformed through their religious rites
Culled from: TVC NEWS