March 03, 2021
Home Uncategorized Grand Mosque of Mecca’s ancient details revealed in 63-year-old image
One can also see the four famous shrines of the Great Mosque
as they appeared before they were consolidated. (Al Arabiya) 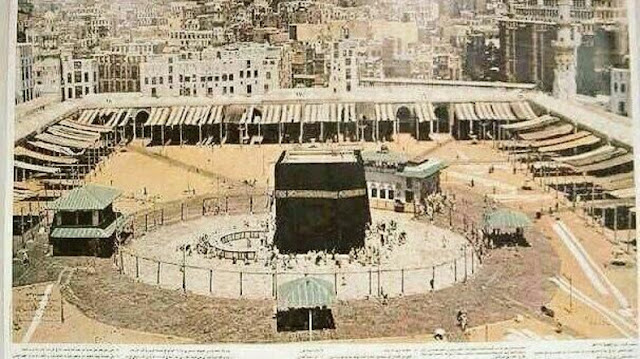 Al Arabiya English
A picture taken in 1954 revealed the rectangular form of the Grand Mosque, the ‘Tawaf’ – which is the area where Muslims circumnavigate the Kaaba as a ritual – as well as the fence placed around the Mosque and the Bani Shaibah door.
The researcher in the affairs of the Two Holy Mosques, Mohieddine Hashemi explained that the umbrellas that have been installed over the Ottoman portico were done by orders of King Abdul-Aziz in order to protect the worshipers from the sun at noon.
One can also see the four famous shrines of the Great Mosque as they appeared before they were consolidated, while retaining the shrine of Abraham and the Zamzam building. The picture features the ‘Tawaf’ that has been divided into two areas; the area within the fence surrounding the Kaaba, which is the old ‘Tawaf’, paved with rocks, and the area surrounding the fence, which is also paved with rocks, and we can distinguish the four shrines.
Hashemi pointed out that the sandy areas remained as they are in the picture, which are located between the Ottoman portico and the start of the stripe of the four shrines.
He noted that the four shrines belonging to the four doctrines “Shafi’i, Hanbali, Maliki and Hanafi,” were removed earlier so all Muslims can follow the guidance of one Imam. This was during the reign of King Abdul-Aziz.
The first documented record of the great Mosque was taken in 1880. The footage of the sacred Kaaba demonstrates the ‘Tawaf’ exhibiting the details of approximately 137 years ago.