January 19, 2023
Home Hajj News Guidance Reza Salehi-Amiri responds to Saudi Hajj invitation
“Iran has responded to an official invitation” it has been sent by Saudi Arabia to attend meetings to discuss the resumption of the Hajj pilgrimage for Iranians, an Iranian official has announced.
Seyyed Ali Qazi-Askar, the representative of Leader of the Islamic Revolution Ayatollah Seyyed Ali Khamenei in Hajj and pilgrimage affairs, announced that Iran’s Minister of Culture and Islamic Guidance Reza Salehi-Amiri had responded to the Saudi invitation by means of a letter addressed to Saudi Pilgrimage Minister Mohammed Bentin, ISNA reported on Tuesday.
The Iranian Hajj official said that, in his letter, Minister Salehi-Amiri communicated Iran’s ideas and concerns to the Saudi side.
Qazi-Askar had confirmed the receipt of the invitation last Monday.In September 2015, a deadly human crush occurred during Hajj rituals in Mina, near Mecca. Days into the incident, Saudi Arabia published a death toll of 770 but refused to update it despite gradually surging fatality figures from individual countries whose nationals had been among the victims of the crush. Unofficial sources put the death toll at almost 7,000 people. Iran said about 465 of its nationals lost their lives in the incident. 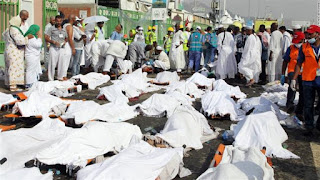