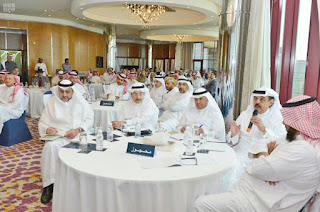 RIYADH – The General Authority of Civil Aviation (GACA) announced on Wednesday that Haj flights for the annual pilgrimage of 2017 will start arriving on July 24 (Dhul Qaada 1). The last Haj flight will land at Jeddah’s King Abdulaziz International Airport on Aug. 26 (Dhul Hijjah 4), the Saudi Press Agency reported.
It is expected that there will be an increase of more than 260,000 foreign pilgrims this year comparing with the last four year’s because of the lifting of the Haj quota cut imposed in 2013.
According to the figures of the Saudi General Authority for Statistics, a total of 1,862,909 pilgrims performed Haj in 2016, of whom 1,325,372 pilgrims came from 169 countries apart from 537,537 domestic pilgrims.
There had been a 20 percent cut in the quota for foreign pilgrims coming from each country while the number of people allowed to perform Haj within the Kingdom was reduced by 50 percent to ensure the safety of pilgrims during the largest ever expansion of the Grand Mosque in Makkah.
Meanwhile, GACA organized a workshop on improving air navigation of Haj pilgrims at Jeddah Hilton Hotel. Representatives of several government and private departments and agencies involved in the Haj operation attended the workshop. These included Makkah and Madinah emirates, Ministry of Haj and Umrah, Jeddah and Madinah airports, Makkah Development Authority, Saudi Arabian Airlines and almost all aviation companies operating in the Kingdom.
It was announced at the workshop that GACA strives to achieve the goals of the National Transformation Program and the Vision 2030 that target increasing the number of Haj pilgrims to 2.5 million by the year 2020 and to four million by 2030 respectively.
GACA granted license to 58 aviation companies from around the world to operate Haj flights in 2016. These airlines transported 1,246,660 foreign pilgrims, of these 694,171 pilgrims arrived Jeddah airport while 551,170 pilgrims landed at Prince Muhammad International Airport in Madinah.
Source: Saudi Gazzete

Reviving the Soul in the Last Days of Ramadan

Reviving the Soul in the Last Days of Ramadan