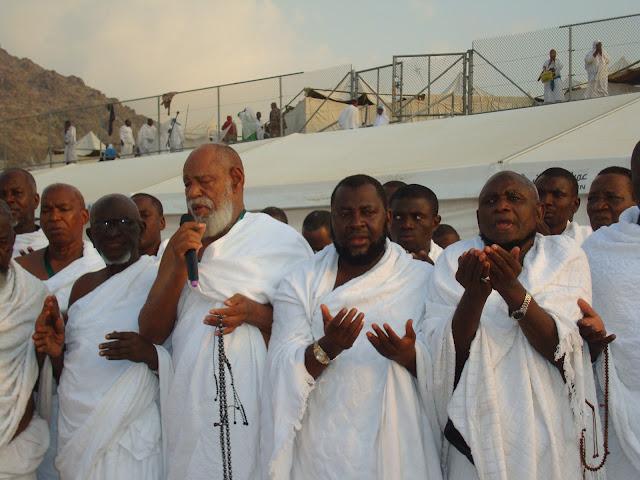 Sheikh Dahiru Bauchi and other Islamic Scholars                     praying for the nation in Arafat
Arrangements have been concluded for the first phase of the education and orientation exercise for intending pilgrims for this year’s hajj from the Federal Capital Territory (FCT).

The Spokesperson of the Muslim Pilgrims Welfare Board, Muhammad Lawal Aliyu who disclosed this in a statement said that Islamic scholars have been fully mobilized for the exercise that would take place at the permanent hajj camp located at Basan Jiwa close to the Nnamdi Azikwe Internatinal Airport, Abuja.

Muhammad explained that the exercise would be conducted in four phases to enable the intending pilgrims get enlightened on the hajj rites as well as new policies introduced for this year’s hajj by the Saudi authorities and National Hajj Commission of Nigeria (NAHCON).

The Public Relations Officer advised Intending Pilgrims from the territory for this year’s hajj to participate in the four exercises which is scheduled to commence on Saturday 13th of May with intending pilgrims from Abaji, Kwali and Gwagwalada area councils.

According to him, intending pilgrims from Bwari, Kuje and Abuja Municipal Area Councils would have their first phase of the orientation exercise on Sunday 14th May, 2017.

He therefore warned all intending pilgrims who are yet to return their completed application forms or submit their international Passport to do so to enable the Board commence the process of their travel documents.

Accordingly, the board has commenced Radio Phone-in live programme in two FM Radio Stations in the FCT for this year’s intending pilgrims.
The Spokesperson explained that the Radio programme would be aired on Aso Radio 93.5 fm every Tuesday between the hours of 9.00 and 10.00 oclock in the evening and Vision 92.1 fm on every Friday from 9.15 to 10.00 oclock in the evening till the completion of airlift of FCT intending pilgrims to Saudi Arabia.

He advised intending pilgrims particularly the first timers, to take advantage of the programmes and enhance their Islamic knowledge on Hajj rites as well as important information that would assist them in attaining acceptable hajj.