November 26, 2022
Home Nahcon Hajj 2017: No Going Back on Online Registration-NAHCON 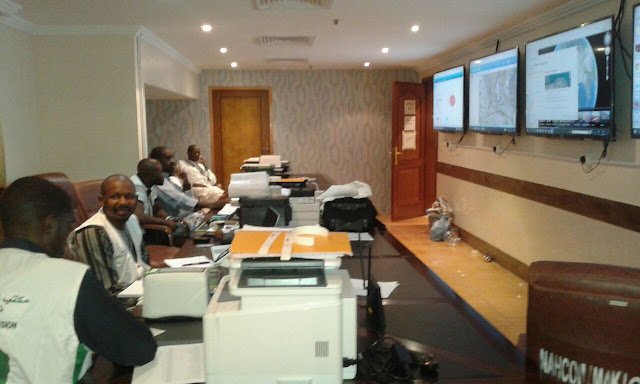 Hajj Reporters
The National Hajj Commission of Nigeria (NAHCON) has insisted that it will encourage the promotion of online  registration of pilgrims for the 2017 Hajj exercise.
The Chairman/CEO of the Commission, Barr. Abdullahi Mukthar Muhammad, restated this while declaring open the collaborative partnership between the Commission, the Pakistani’s Punjab Information Technology Board (PITB) and states IT personnel in Abuja.
In his welcome address, Barr. Abdullahi said the role of information Technology in modern day Hajj management cannot be over emphasised, stressing “IT has become a reality today. It has become part and parcel of Hajj management in many other places and Nigeria cannot be in isolation.”
“If we have a robust Hajj platform. It would not only be useful for Nigeria alone, but our brother countries in the West African sub-region would also benefit,” he added.
Barr. Abdullahi therefore enjoined the participants to utilize the interactive session to come up with a robust IT platform that will be deployed for the 2017 Hajj, particularly the one that will enhance transparent registration and to also restore intending pilgrims confidence in Hajj administration.
The NAHCON boss further charged the participants to conceive a module for registration and an HelpLine Desk within the period, while also working towards developing other platform to administer medical services and Hajj Savings and investment Scheme.
The Chairman also expressed his appreciation to the Punjab Team, the Pakistani Hajj Mission and the Ministry of Foreign Affairs for facilitating the bilateral relationship which he said not only demonstrated the commitment of the two countries, but also contributed to the success of the engagement.
“we are very pleased that you are using your talent to support your brotherly country, and divine cause.”
Barr. Abdullahi, who described the epoch-making event as divinely solidified because the concept was started informally at a meeting between him and his Pakistani counterpart during the 2016 Hajj.
The NAHCON boss also praised the Saudi Arabian authorities for the introduction and implementation of Information Technology for Hajj which he said had contributed to the success of Hajj organisation and management globally through the e-track system.
In her response, the PITB team leader, Sister Saima R. Shaikh who is also the Director Training and Development, expressed her delight for the opportunity to assist the Commission in her quest for IT development.
” I am really happy to be here and it is an opportunity to assist Nigeria in a good cause,” she said.
She however cautioned that like any new thing, concerns and reservation would be made on some few challenging areas, but added “I can assure you that gradually the people who initially show resistance would come to appreciate you and the concept”.
Sister Saima further pledged to continue to work closely with the Commission to achieve its ambition.
The Punjab Team which showcased Technology Empowering the Hajj operations, has over 20 module which included, online registration of Hajj applications, selection of Hujjaj through transparent e-balloting, Automated flight scheduling and building/rooms Allocation, Automated and centralised Hajj camp e.t.c.
It would be recalled that the NAHCON and the Pakistani Hajj Mission at a meeting in Makkah, Saudi Arabia in October last year agreed to explore and arrange a meeting to develop on Hajj management Information Technology  System for the online registration of 2017 intending pilgrims.
About 15 states attended the interactive session which included, Nasarawa, Zamfara, Ondo, Kano, Katsina, Adamawa and Jigawa.