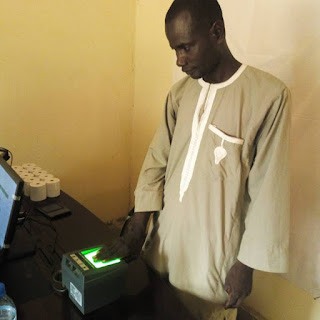 Hajj Reporters
Kwara State Muslim Pilgrims welfare board said it has started the biometric capturing of 2019 intending pilgrims across the 16 local governments in the state.
According to the boards public relations officer, Hajiya Jumoke Jimoh, “Only those who made a deposit of N1 Million and N1.3 million naira are eligible for capturing includes that made their payment through the state pilgrims boards website”
The statement further enjoined intending pilgrims to be alert as “phone calls or text messages will be sent from the boards intimating them to appear for the biometric process along with their receipts of payments and clearance” Intending pilgrims are to come with 4 passport  size photograph with white background”
During his visit to the venue of the biometric data capture, executive secretary of the board,  Alh Mohammed Tunde Jimoh “expresses satisfaction with the speed in which the process is progressing with over 30 pilgrims captured already”
One of the biometric data capture staff, Abdullateef  Garuba “said that there will be no congestion as witness last year because the process is going on smoothly”.