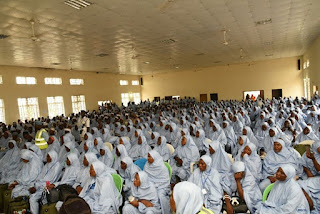 Hajj Reporters
Towards the preparation for 2019 hajj, Nasarawa State Muslim Pilgrim Welfare Board set to commence pilgrims enlightenment across the local governments and development areas.
This was contained in a statement signed by the Board’s Public Relations Officer Abdul-razaq Muhammad and made available to newsmen.
The statement Said that the Executive Secretary of the board Malam Idris Ahmad Almakura had earlier organized a train the trainer’s workshop to educate scholars on  guideline of the enlightenment program.
“It is compulsory 75% attendance from all prospective pilgrims as the Executive Secretary will be leading other management staff for regular supervision of all enlightenment venue across the state”.
The statement urges the religious scholars on the need to expand their enlightenment from Hajj related issues to moral conduct of pilgrims while in the Holy Land.
Meanwhile, the board has sponsored a Live Radio Enlightenment Program in the two media houses in Nasarawa State to be anchored by PRO of the board.