The Lagos State Muslim Pilgrims Welfare Board is set to organize a One-day retreat for its members of staff.

The retreat which is the first of its kind since the Board was  established in 1967 is scheduled to hold on Thursday, October 7, 2021 at the Shamsi Adisa Thomas (SAT) Mosque Auditorium, GRA, Old Secretariat, Ikeja.

Lagos may not register new pilgrims for Hajj 2022 – Commissioner

According to a statement signed by the Executive Secretary of the Board, Mr. Rahman Ishola, the retreat with the theme, “Marketing Strategy and Better Communication Skill on Holy Pilgrimage” would be declared open by Hon. Commissioner for Home Affairs, Prince Anofiu Olanrewaju Elegushi, in his capacity as the Special Guest of Honour.

The statement added that Mr. Mohammed Bashir Braimah, a retired Permanent Secretary from the State’s Public Service and Mrs. Toyin Ademuyiwa-Anjous, Director, Creativity and Innovation in the Office of Transformation, Creativity and  Innovation (OTCI) are the two facilitators invited to share experiences during the retreat.

Ishola confirmed that Mr. Braimah will speak on the topic, “Working to get results in uncertain times” while Mrs. Anjous shall deliver lecture on “Work ethics and attitudinal re-orientation”. 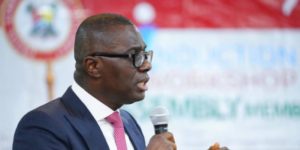 While emphasising that the retreat was designed to adequately prepare members of staff ahead of the onerous and sensitive task of managing intending pilgrims for the Y2022 Hajj operation, he urged them to participate fully in order to benefit from the experiences of the facilitators.