Katsina State Pilgrims Welfare Board under the leadership of Executive Director Alhaji Suleiman Nuhu Kuki has RECEIVED Received an award of Excellence in Hajj Service delivery During the 2022 Hajj.

The award was bestowed on the Katsina state Muslim pilgrims’ welfare board by the National Hajj Commission of Nigeria, NAHCON for its Outstanding Policy in the constitution of operational Committees that served the Pilgrims diligently and for effectively monitoring the Pilgrims’ enlightenment during the 2022 hajj. 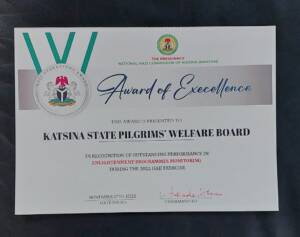 So far, the board has received five awards for its outstanding performances during the 2022 hajj.  The awards were presented to the board during the 2022 Post Hajj Stakeholders Meeting held today the 17th of November, 2022 at the Auditorium Hall of National Mosque Abuja.

Presenting the awards to the Executive Director of the Board Alhaji Suleiman Nuhu Kuki, the Chairman and Chief Executive Officer of the National Hajj Commission of Nigeria Alh. Zikrullah Kunle Hassan said the awards were presented to the Katsina State Pilgrims Welfare Board based on its Outstanding performances in the areas of the smooth constitution of Hajj 2022 Committees and monitoring of Pilgrims’ education/enlightenment among others.

Alhaji Suleiman Nuhu Kuki appreciated the awards and commended the National Hajj Commission of Nigeria for its effort in moving the Hajj Industry forward.

The Executive Director further appreciated the concern of His Excellency the Executive Governor of Katsina State Rt. Hon Aminu Bello Masari CFR, and attributed all the successes achieved by the Board to His unflinching support.