Two states have joined the Kaduna State Muslim Pilgrims Welfare Board in demonstrating transparency in running their affairs. This is practicalised by their various responses to the request by Hajj Reporters (HR) to account for the refunds of Hajj fares to prospective 2020/2021 pilgrims who could not perform the annual rite that was cancelled by the Saudi authorities due to COVID-19 pandemic.

The two exemplary agencies are the Kogi State Hajj Commission and Adamawa State Muslim Pilgrims Welfare Board. The duo responded to the request sent by Hajj Reporters to some State Muslim Pilgrims Boards seeking for details of the aborted Hajj refunds by the affected states for two consecutive years. HR premised their request on the strength of the Freedom of Information Act.

While the Kogi State response is contained in a letter dated 7th of September 2021, with a reference number KG/HC/OFF/64/176, and addressed to Editor-In-Chief (EIC), Hajj Reporters Media Ltd, the Adamawa State Muslim Pilgrims Board replied via a letter dated 6th September 2021, with reference number AD/MPWC/OFF/124/6, also addressed to the EIC of Hajj Reporters Media Ltd. 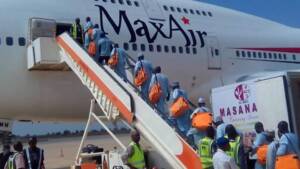 The commission explained that “out of the three hundred and ten (310) pilgrims for hajj 2020, eighteen (18) intending pilgrims were refunded”.  It also gave other details like the name of bank where the deposits were lodged and amount transferred to NAHCON during the period.

The board added that “a total number of Two Hundred and Ninety Two (292) pilgrims were registered with the commission, making a total of one thousand four hundred and eighteen (1,418).

“Presently, the process of submission of requests for refunds of pilgrim’s deposit and processing of such request is ongoing,” the board added.

However, while Kogi State Hajj Commission gave details of its financial status, the Adamawa State Muslim Pilgrims Boards said “it is constrained to release the financial status of the pilgrims making reference to certain Section of the FoI ACT.

It will be recalled that Kaduna State Muslim Pilgrims Board had responded to the request for details of Hajj 2020/2021 refunds to pilgrims after Hajj Reporters requested affected the states to account for the pilgrims’ deposits.

Hajj Reporters had demanding details of Hajj 2020/2021 refunds especially the number of pilgrims registered and the corresponding numbers that were refunded. HR also requested for amount of money transferred to NAHCON, numbers of pilgrims that enrolled in Hajj Saving Scheme and financial institution where pilgrims’ funds were deposited and interests generated, if any.