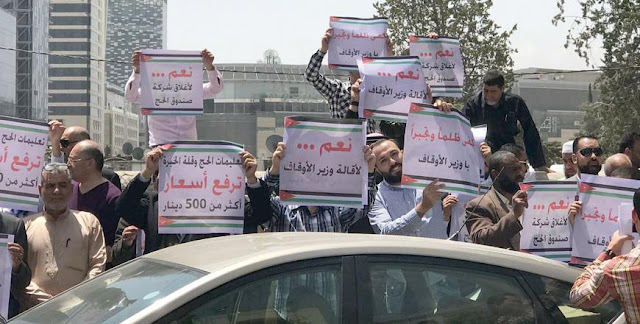 Owners of Hajj and umra companies protest the formation of the National Company of Hajj and Umra, owned by the Ministry of Awqaf’s Hajj Fund, in Amman on Sunday (Photo by Sawsan Tabazah)
Established in 2012 by the Awqaf Ministry, the Hajj Fund allows Jordanian subscribers to save money on a periodic basis in order to perform Hajj (the greater Muslim pilgrimage to Mecca).
The fund invests the money in accordance with Sharia (Islamic law), later using the profits to enable subscribers to perform Hajj.
Umra is the lesser Muslim pilgrimage to Mecca.
Kamal Abu Thiab, the spokesperson of the religious tourism committee at the Jordan Society of Tourism and Travel Agents, said that the company will provide transportation and hotels services just like any private company.
The protesters claimed that the formation of the national company was “illegal”, as its owner, a governmental institution, would be “unable” to monitor its activities.
Protester Anwar Shatnawi said that each Hajj and umra company must be licensed by the Ministry of Tourism, the Jordan Society of Tourism, as well as by travel agents, yet the registered national company did not acquire any of those licences.
Shatnawi said the competition created by the formation of this national company would drive private companies out of business, leading to higher unemployment rates.
Faisal Al Omar, another protester, said the company’s creation would lead to the closure of all 200 private companies that currently provide a steady income for around 10,000 families.
He denounced the move, claiming that people would “trust” the government-based institution more, and refuse to deal with private companies.
Meanwhile, Mohammad Howri, an owner of a Hajj company, said that the new instructions for Hajj and umra, which require pilgrims to pay JD500 for hotel and transportation alone , was “unacceptable and unreasonable”, as most pilgrims are first time Hajj pilgrims, meaning that they should not pay the new visa fees imposed by the Saudi government.
During their protest in front of the Ministry of Awqaf and the Cabinet, protesters called for the resignation of the minister of Awqaf for his “lack of expertise”.
Despite several attempts by The Jordan Times, the Awqaf Ministry could not be reached for comment.
The Jordan Times