The Managing Director and CEO of Azman Air, Alhaji Faisal Abdulmanuf has said that 700 intending pilgrims from Kano state were made to miss Hajj 2022 because officials from the state government and the Muslim Pilgrims welfare agency were petty.

Alhaji Abdulmanuf stated this in an exclusive Interview with Hajj Reporters recently. Azman Air was selected by the National Hajj Commission of Nigeria (NAHCON) to airlift Kano state pilgrims for Hajj 2022. However, officials from the Kano state pilgrims board kicked against the decision, which, according to the Azman boss is the major reason why Kano had the largest continent of intending pilgrims that fully paid for Hajj but missed the exercise.

“A state like Kano went as far as seeking permission to change their allocation from Azman air to another carrier. That, of course, generated a lot of discomfort and administrative bottlenecks for NAHCON. And that was not unconnected to the reason why about 700 pilgrims, unfortunately, could not meet up for the exercise. That number is huge,” he said.

Alhaji Abdulmanuf said officials of the state government alleged that Azman lacked the capacity to carry out the mandate bestowed on it by NAHCON, adding however that “when the operations took full swing, the narrative changed. The pettiness on the part of some stakeholders around capacity later shifted to other conventional matters”.

“Because we are pretty sure about our capacity, we sought permission to convey additional passengers of non-conventional pilgrims apart from the 6,504 official allocations. Luckily, NAHCON granted the permit. 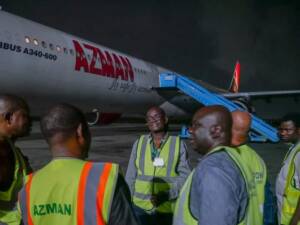 “So, if some states could go as far to petition NAHCON saying Azman lacked the capacity it was not unexpected even though we understand some of these issues are politically motivated. It is so disappointing that pilgrims had to bear the brunt”.

The Azman boss also revealed that while the airline was waiting anxiously to commence airlift from Kano, the Kano state board was busy going around with a petition to change Azman to another carrier of their choice.

“Eventually, Azman was compelled by NAHCON to deploy our aircraft to convey some 400 pilgrims from Lagos to Saudi Arabia.

“Those pilgrims from Lagos were Flynas passengers; they were not part of our initial allocation but because of the operational hiccups, we cannot reject the interchange.

“While that operation continued, we were hoping Kano would have changed their minds for us to resume our operations, unfortunately, that did not happen. And so, Azman has to proceed to Kaduna because we can no longer wait or waste any time,” he said.