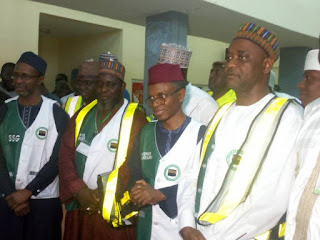 Hajj Reporters
Kaduna State Muslim Pilgrims Welfare Board(KMPWB) has won several local and international awards in the last four years owing to Governor Nasir El Rufai‘s sanitised policies in hajj operations in the state, Engineer Namadi Musa, the Director General of Bureau of Interfaith has said.
The Director General who spoke at a stakeholders forum which was organised by the board today, on how to ensure a successful hajj operation this year, promised that Governor El Rufai will continue giving  pilgrims the necessary support when re-elected.
A statement signed by Yunusa Muhammad Abdullahi, the boards public relations officer quoted  Engineer Musa as saying that “the governor has never interfered in the running of the pilgrims welfare board but he only insists that  square pegs should be put in square holes.
‘’For this reason, the board has always  placed priority on the competence of hajj officials when sponsoring them for the yearly pilgrimage to cater  for pilgrims in the Holy Land, without regard to their political leanings or other considerations,’’ he added.
The Director General therefore  advised the people of Kaduna state to vote for Governor El Rufai next Saturday based on his competence, without taking into cognisance which party  he belongs to.
Engineer Musa point out that  Governor El Rufai’s re-election will ensure continuity in the good works that he has started in the health and education sectors, including smooth sail hajj operations.
Earlier, the Overseer of KMPWB, Imam Hussaini Suleiman Tsoho  said that since 2015 when El Rufai assumed office, hajj operations have been getting better each year.
He pointed out that the board had been using the same staff and hajj officials during previous administrations but the exercise had  been experiencing hitches.
According to him, Governor El Rufai was the only new person in the entire chain of  hajj exercise  but his coming made all the difference because the yearly pilgrimage has changed for the better.
The overseer said that the present administration had cancelled special accommodations for hajj officials and senior government officials like what used to happen in the past, adding that pilgrims and officials now live in  the same  building at   both Makka and Madina