November 25, 2022
Home Global How Nigeria can benefit from Hajj economy, By Ahmad Muazu

In recent times, the cost of Hajj has risen globally generating billions of dollars.

Prior to introduction of modern system of transportation, Muslims outside the Arab region had little expectation of making this vital religious obligation

Before the mid 1950’s the number of international pilgrims rarely exceeded 100,000 and modern Saudi institutions were still developing, yet by the year 2000 the number of pilgrims had surpassed two million, reaching a peak of three million by 2012.

New opportunities for pilgrims in the jet age have put immense pressure on infrastructures and with the growing pressure, the Saudi government has to invest huge funds to improve the facilities and the overall management of Hajj.

Millions of pilgrims came to Makkah every year, bringing in billions of dollars to the Saudi restaurants, airlines, hotels, travel agents, mobile operators among other numerous businesses that benefit from the Hajj business eco system.

Benefits from taxes and revenue generation from pilgrims makes up to 31% of Saudi non-oil GDP; reaching approximately Eight billion dollars. This becomes the second source of income to the Saudi government after hydrocarbons and this figure does not includes sources from Umrah Operations.

In 2007, Umrah operations alone attracted 8 million pilgrims which generated $4 billion Us dollars for the kingdom’s economy. The vision 2030 targets 30 million pilgrims per year. According to Makkah chamber of Commerce, 25 to 30% of businesses in Makkah and Madina depend on pilgrims to survive.

In Nigeria, there is still little data on the impact of Hajj on the Nigerian Economy making it difficult to work out the impact. The Hajj organization in this country has a spill over to various sectors and various industries.

The Saudi government allocates quotas to countries based on the international organization of Islamic cooperation agreement allowing one thousand pilgrims per million of the Muslim population in each country, although there is flexibility in the distribution pattern – a good example is the Covid era.

Muslims in Nigeria are privileged as they go hajj on demand, unlike Indonesians whose intending pilgrims has to be on queue for 7 to 20 years or even more before they could perform hajj. The hajj deposits made by those pilgrims are used to help reduce the cost of Hajj for the pilgrims. In the UK Hajj packages average around four thousand seven hundred and fifty pounds where umrah is ten thousand and fifty, the cost has increased in recent years.

The Nigerian Hajj Market is worth trillions in Naira, while the Saudi targets hajj revenue growth to $160 billion in 2020 and $267 billion in 2030. The hajj host country has so far invested over $50 billion to boost infrastructure and transport with the target of raking $150 Million from Hajj Sector, and the creation of 100,000 permanent jobs for their citizens.

As Nigeria looks towards diversification of its economy, there need to sway away from oil and explore other revenue generating sectors. In this case, Hajj and Umrah sector will be an avenue to explore because the number of people willing to travel to Saudi Arabia to perform hajj or Umrah are o the steady increase. If the infrastructures of supporting Hajj is be put in place, the spillover effect will be massive as revenue generation will soar and jobs will be created. Imagine the number of passports being done each year for the purpose of travelling to Saudi for Hajj and Umrah alone. There is an urgent need to undergo in-depth research on the contributions of hajj industry to the Nigerian economy.

With the target of 4.5million hajj pilgrims and 30 million Umrah pilgrims by 2030 the Saudi reliance on the sector to increase its economic growth is very substantial.

The key challenge to Nigeria here is how to tap on this innovation and also stimulate the Hajj industry growth, as the increase of the number of pilgrims will give birth to more organizational problems. But it can be utilized as well to boost the economy in so many ways from reviving textile industries that may cater for pilgrim uniforms to other industries like aviation, food and beverages as well as other small-scale industries.

READ ALSO: FROM THE ARCHIVE: How NAHCON was saved from Oronsaye Report hammer (II), by Ibrahim Muhammed

The involvement of government in Hajj activities in Nigeria predates independence. in 1955, Late Sir Ahmadu Bello made a trip to Saudi Arabia as sponsored by the northern region government then. Since then, federal government has been trying to see how it can safeguard the welfare of Nigerian pilgrims.  Also in 1958, the southern region established its pilgrim’s welfare management under the leadership of Chief Obafemi Awolowo, the board was established to find a lasting solution to the gamut of problems encountered by the Pilgrims.

The hajj industry has been given very special considerations since that time, from special Hajj passports down to subsidizing the fare among other numerous exceptions due to its high economic value as well as consideration by the Muslim populace.

The HSS is on a promising trajectory but the hullabaloo by states and some stakeholders is trying to slow its implementation, the necessity of giving it high degree of credibility cannot be overemphasized as this will foster and improve the Hajj ecosystem.

Just like in the aviation industry booking a seat early cost less than that of the late subscribers, the ratio of Nigerian pilgrims booking late is at 56%because it has become obvious that people lack the economic strength or saving habit in order to achieve the ultimate journey.

Looking at the spending power of Nigerians in the kingdom of Saudi Arabia the locals even have to learn a few dialects in order to market their products shows that Nigerians are heavy spenders when it comes to Hajj and Umrah. 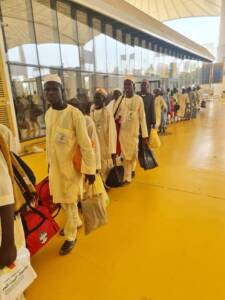 In addition, The Saudi government as part of austerity measures have tripled the VAT to support its pandemic hit economy

A more streamlined process and regulations should be encouraged as this will foster the economic growth of Nigeria and Africa as well.

The Nigerian government should plan to tilt more towards tapping the Saudi vision 2030 by encouraging more exports to Saudi just like other countries do in order to make their pilgrims feel more comfortable and also to generate revenue that will serve all Pilgrims.