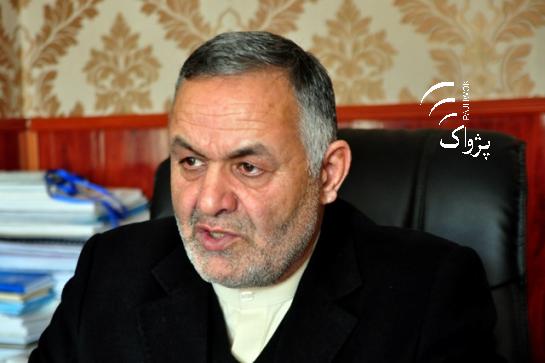 Hajj and Religious Affairs Minister Faiz Mohammad Mukhtar
Pajhwok Afghan News
Intending hajj pilgrims have deposited more than $60million to the State Bank of Afghanistan in advance this year, hoping to get a chance to visit Saudi Arabia in next four years. The bank has promised not to use the money.
Hajj and Religious Affairs Minister Faiz Mohammad Mukhtar told Pajhwok Afghan News about 125,000 pilgrims had been registered for the holy journey, showing a considerable increase in their number compared to previous years due to the decreased prepaid money.
Mukhtar said the prepaid money of each pilgrim had been reduced to $500 from $1,060 in compliance with a decision by the National Assembly and the National Hajj Committee.
“Hajj expenses are determined after all costs of pilgrims’ accommodation, airfare, general expenses and money taken by Saudi Arabia are calculated.”
About 30,000 pilgrims are expected to be sent to Saudi Arabia for this year’s pilgrimage from Afghanistan, including 8,000 women, the minister said, adding the 30,000 aspirants would be selected through a lucky draw among 45,000 people who had registered themselves for hajj last year.
About 140,000 hajj applicants were already on the list pending and the 125,000 people registered this year would be arranged and included in the pilgrims’ list in the next four years through a lucky draw among all of them.
He said the process of collecting money in advance had been launched about four years ago and every year 40,000 to 70,000 people had registered and paid $1,000 in advance.
Specific figure for the money deposited in the State Bank was unknown due to the lack of a certain number of hajj applicants in past years, he said, adding this year about 62 million and 500,000 US dollar had been deposited to the state-run Bank-e-Millie Afghan, with each applicant giving $500.
Javid Wafa, Bank-e-Millie Afghan chief, said: “The money has been transferred to the current trust account of the bank (without investing any or obtaining interest). The money would be saved for four years and this bank is bound to provide the money when needed for the Hajj process everywhere in the world.”
He said the bank wouldn’t use the money kept as safekeeping and international and local central bank’s auditing teams would investigate the existence of the money after every three months. However, he said they charged 300 afghanis from every applicant as banking services.
On the other hand, some religious scholars called forcing hajj applicants into paying money in advance as illegal and un-Islamic and called for the process to be stopped.
Maulvi Shamsurrahman Forotan, a member of the Ulema Council, said: ‘This money is deposited as safekeeping, but the bank uses it for commercial dealings which is un-Islamic.” According to him, it might be a secret deal between the ministry and the bank.
Meanwhile, Mohammad Hassan Haqyar, another religious scholar, also criticized the ministry, saying there was no reason for taking money in advance. ‘The ministry should give up this practice.”
“Getting money from pilgrims in advance has no background in Shariah; in one or two years one can get profit from the $500.” He also believed the bank would use the money in commercial deals and a secret deal existed between the ministry and the bank.
Saifuddin Saihoon, a professor at Kabul University, said receiving money from those intending to go to Hajj without providing them services was illogical.
However, MoHRA officials denied the allegations regarding any deal or misuse of the money. They said the money was being taken in advance for better organizing the hajj process and the ministry had no other aim or benefit.
Minister Mukhtar said: “In line with the agreement between the Bank-e-Millie Afghan and the ministries of MoHRA and finance, the bank couldn’t use the money under any circumstances and the money is safekeeping with bank.” He didn’t go into details, saying the bank had guaranteed no use of the money.
To a question about receiving money in advance, he responded: “We don’t need the money of pilgrims, but it is for facilitating the process and it is saved with the bank.”
In the past years, he continued, some people after registering for the Hajj used to change their decisions, denying going to the pilgrimage. “Now the money will help show their strong decision.”