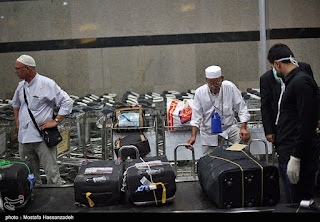 The Iranian government’s decision to subsidize the hajj pilgrimage has fueled anger among many Iranians who are struggling to make ends meet.
The Iranian government has approved a generous plan to facilitate participation in the hajj, offering Saudi-bound travelers the opportunity to pay for the voyage — estimated to cost over $3,000 — in local currency at rates far below the open market.
As of March 5, the US dollar cost around 130,000 rials on the open market, over three times the official rate, which has stood at a fixed 42,000 rials for almost a year now. The subsidized rate offered to pilgrims will be just over half that on the open market, or 70,000 rials per dollar.
According to Alireza Rashidian, the head of Iran’s Hajj and Pilgrimage Organization, the government of President Hassan Rouhani is doing its best to minimize costs for Iranian hajis. Some 85,000 Iranians are expected to embark on the pilgrimage this year. The first groups will land in Saudi Arabia in the second half of July. Rashidian announced that Iran is also awaiting approval from Saudi officials to increase its quota by 10,000.
Aside from the subsidies for the cost of the pilgrimage itself, the Iranian government has approved an extra $200 per pilgrim, also to be sold below the open market rate.
As part of its austerity measures triggered by the free-fall of the rial in the past year, the Rouhani administration has been keeping as much foreign currency at home as possible. In one controversial step, the government tripled departure taxes to around $50. To further discourage foreign travel, the rates are $75 and $100, respectively, for a second and third exit in the same Iranian year.
To many Iranians, these belt-tightening policies stand in sharp contrast with the generosity shown toward those who travel for the purpose of pilgrimage, and their anger is nothing new. Last September, the government sparked criticism among both the religious and the non-religious when it provided Iranians who visit Iraqi holy sites the privilege of paying visa fees with subsidized currency.
Major turbulence in Iran’s forex market in the past year, with severe fluctuations and a record nosedive of the national currency, has translated into skyrocketing prices of basic supplies for ordinary Iranians. The government’s subsidies for hajis are therefore seen by many as an unfair privilege. “I’m not content with being pickpocketed,” tweeted one Iranian.
Under Islamic rules, a strict condition for pilgrims is financial ability, meaning that the traveler must be able to afford the costs without a loan or other assistance. Some critics have attacked the government’s offer on that basis.
Since the outbreak of the Saudi-led war on Yemen in 2015, another argument in Iran has centered around the possibility that the money spent on the hajj ends up financing the Saudi war effort, which has claimed thousands of civilian lives and pushed Yemen to the brink of extreme poverty and famine. The government subsidies could have been invested, for instance, in reconstruction in the earthquake-stricken areas in the western province of Kermanshah. One Twitter user wrote, “People are still living in tents and makeshift metal structures. Still, the government is giving away $3,300 at a low rate to pilgrims. … That’s what makes the difference between first and second-class citizens.”
The issue of the hajj has long drawn a clear line between the highly religious and those with moderate leanings, who sometimes cite a famous poem by the 13th-century Persian Sufi mystic Rumi, who calls on pilgrims to embark on a true religious journey by helping those in need surrounding them instead.
The poem is sung by the popular Iranian musician Mohsen Chavoshi in a video that is being widely circulated across social media platforms with pictures of impoverished children, appealing to pilgrims to focus on improving their fellow Iranians’ lives rather than spending money on trips to Saudi Arabia.
AL MONITOR