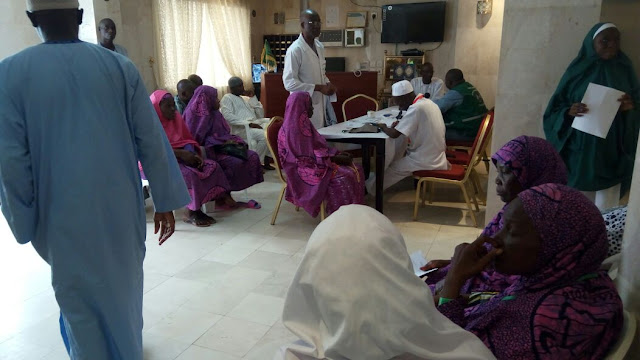 National Medical Team attending to Pilgrims during 2016 hajj in Makkah
The Kano State Pilgrims Welfare Board has directed prospective pilgrims to go for medical test at the designated health centres in the state.

The board’s Executive Secretary, Malam Abba Yakubu, gave the directive on Saturday at the flag off of the weekly sensitisation workshop organised for intending pilgrims in Kano.

Yakubu said the test would enable the pilgrims to know their health status with a view to getting necessary medical advice on how to handle their respective health challenges.

He said: “The medical test will give intending pilgrims the opportunity to know their health status, while those with some health challenges will get necessary medical advice.”

Yakubu said it was also in line with the National Hajj Commission of Nigeria directive that all the state pilgrims welfare boards should ensure that intending pilgrims go for medical test.

On accommodation, he said the state government had already secured decent place for them near the Holy Ka’aba to enable them to go to Mosque with ease.
Yakubu said: “The essence of getting accommodation for the pilgrims near the Holy Mosque is to reduce the hardship being experienced by pilgrims in reaching the Mosque and the need to prevent loss of pilgrims’ lives.”

According to him, the state government has upgraded the 31 pilgrims’ sensitisation centres to Hajj Training Institutes as part of the efforts to enhance research on entire Hajj rites.

He urged intending pilgrims to take the workshop seriously in order to understand all the Hajj rites.

The State Deputy Governor, Prof. Hafiz Abubakar, also urged them to desist from any act capable of denting the image of the state and the country.

He commended the board for initiating the programme, saying that it would go a long way in educating the pilgrims on the Hajj rites.

Abubakar also advised intending pilgrims to ensure prompt payment of the balance of their Hajj fares whenever the Federal Government announces it.

In his remarks, the NAHCON Kano Zonal Coordinator, Alhaji Umar Bala, urged the board to ensure that the Islamic scholars engaged to conduct the workshop accompany the pilgrims to the Holy Land.

NAN reports that the weekly sensitisation workshop will hold every Saturday and Sunday and will last for two months.
NAN