December 08, 2022
Home Global Kids at Hajj: Should your little one become a pilgrim? 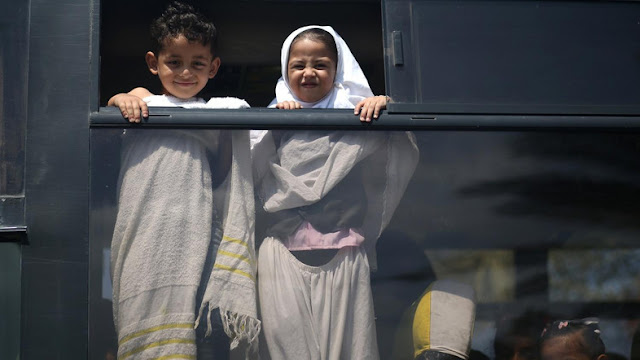 Can kids go to Hajj? Should they? What are the rules, regulations and Islamic teachings? (File photo: AFP)
Can kids go to Hajj? Should they? What are the rules, regulations and Islamic teachings concerning your little ones?
The question is posed by many parents in the months leading up to the annual pilgrimage, which commenced the week. It is regarded as the journey of a lifetime by Muslims wishing to complete the fifth pillar of Islam.
For some Muslim parents, taking your children to Hajj could be a part of teaching them about Islam, said one British mother currently in Makkah with her husband and son.
“I want to take my son for him to understand the importance of Hajj and reap the rewards of the journey. It is part of teaching him our religion,” Reyhana Sayed told Al Arabiya News.
But this view is not shared by many. Taking youngsters to Hajj is not obligatory in Islam, says Dr. Mohammad Alkobaisi, grand mufti in Dubai’s Ministry of Islamic Affairs.
“Religious duties are linked with adulthood and the ability to shoulder responsibility. There are no religious obligations upon children, including the Hajj and Umrah pilgrimages,” Dr. Alkobaisi told Al Arabiya News.
“However, kids can go to Hajj if their guardian would like to take them with him/her, and the rewards of this Hajj will be credited to the child, as well as to the guardian that helped the child,” Dr. Alkobaisi added.
Muslims cite a particular hadith, or teaching of the Prophet Mohammad, when contemplating the matter.
“A woman lifted up her child and said: O Messenger of Allah, would the child be credited with having performed the Hajj? Thereupon he said: Yes, and there would be a reward for you,” the hadith recorded by Imam Muslim states.
Old enough?
But while it is allowed, it’s important to note that the Hajj of a child does not eliminate the obligatory Hajj on him/her after they reach adulthood, explained Dr. Alkobaisi.
The matter is also dependent on the ability of the child to comprehend and perform the required duties of Hajj.
“This begins with the intention of Ihram (entering in the state of ritual sanctity for Hajj). If the child is old enough to comprehend that, then he does that by himself after the permission of the guardian. The child can then perform the rest of the duties of Hajj by himself,” Dr. Alkobaisi added.
However, if the child is not old enough to comprehend that, then the guardian should make the intention of Ihram on his behalf, and guide him/her through the rest of the duties, the grand mufti states.
Also, any duties that the child cannot perform, such as the symbolic devil-stoning ritual, can be performed by the guardian on the youngster’s behalf.
But ultimately, the decision of taking children for Hajj depends on the parents’ or guardian’s cautious assessment.
“Such a decision should not be taken lightly, as children are more prone to heat, sunstroke, contagious diseases and other difficulties during Hajj. In case they decided to take their children, the parents should give them all required vaccines, and take precautions, pay attention to the children at all times, keep them hydrated, inside tents or in the shade and stay away from congested places,” warned Dr. AlKobaisi.
There are no official numbers as to how many children are expected to attend this year’s pilgrimage, but with 1.3 million Muslims already descending on Makkah, it is important to share these top tips for parents taking children to Hajj, recommended by Tasnim Nazeer, a UK-based writer on Muslim issues.
Top tips for taking children to Hajj
1. Get the necessary immunizations done
2. Ask whether your Hajj guide has special facilities or programs for kids
3. Keep hydrated and wear light clothing, preferably cotton
4. Prepare for colder days during your pilgrimage, such when pilgrims visit Muzdalifah
5. Take along basic medicines such as cough syrup and pain killers