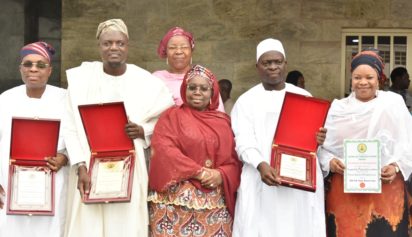 Representative of Lagos State Governor & Deputy Governor, Dr. (Mrs) Oluranti Adebule (middle); South West Commissioner, National Hajj Commission of Nigeria, Imam Fauad Adeyemi (2nd right); Special Adviser to the Governor on Housing, Mrs. Aramide Giwanson (right); Commissioner for Home Affairs, Dr. Abdul-Lateef Abdul-Hakeem (2nd left); CEO, Medview Airline Plc., Mr. Muneer Bankole (left) and Managing Director, Africana Home Restaurant Dubai, Mrs. Khadijat Ebon Bakare (behind) during the awards presentation to the Lagos State Government by the Hajj Commission at the Lagos House, Ikeja, on Friday, July 7, 2017.
Lagos State Government on Friday beat 35 other States to bag the prestigious award for the best performing State in the 2016 Hajj Operations in Nigeria.
The award was one out of the six the State also won for its excellent performance throughout the duration of the 2016 Hajj exercise in Mecca and Medina. Other awards won by the State include Best State in Coordination of pilgrims airlift, Best State in E-Track Management, Second Best State in pilgrims education and enlightenment programme, Second Best State in Taradudiyyah Exercise, Third Best State in provision of pilgrims accommodation and Third Best State in coordination of pilgrims feeding.
South West Commissioner of the National Hajj Commission (NAHCON), Mr. Fauad Adeyemi who presented the awards to the State Governor, Mr. Akinwunmi Ambode at the Banquet Hall, Lagos House in Ikeja, said out of the eight categories of awards instituted by the Commission, Lagos won in seven. He thanked Governor Ambode for supporting the pilgrims and providing the necessary logistics that made the holy exercise not only worthwhile, but one that stood the State out from the crowd and made Nigeria proud. “I want to thank the Governor for his support because if a Christian Governor can support his people to the level that they became the best, not only the way we used to know Lagos State, but they became the best throughout the nation and not only the nation, but they have an impact throughout the world.
You did not only make us proud, personally you have made me proud,” Adeyemi said. Responding, Governor Ambode, while thanking the Commission for finding Lagos worthy of the awards, said it would spur the State on to retain the awards in subsequent exercise. “For us in Lagos, we do not just see the awards, we focus on making the people comfortable. We thank the Hajj Commission, not because they recognized us, but because it’s only out of fairness that when you see a good thing you recognise it. “For us as a government, we are committed to make life more comfortable for our people because we know that it is the essence of us being in government.
This ward is just an inspiration for us, this is a challenge again that we must keep all these awards by the grace of God in this 2017 Hajj operations,” he said. Governor Ambode, who was represented by his Deputy, Dr. Mrs. Idiat Adebule, also thanked the Muslim Pilgrim Welfare Board and other partners of the State Government that worked towards the success of the Hajj, reminding them that the award was a call to sustain the good works. “What we have achieved that is being celebrated today, we must not relent. On our part as Government, we pledge our commitment to ensure the best of facilities, the best of enabling environment is provided for our pilgrims,” he said.
On his part, Commissioner for Home Affairs, Hon. Abdulateef Abdulhakeem in his welcome address, said that the awards were more feathers to the awards already won by the impressive performance of the Governor Ambode led administration in all sectors. The Commissioner also assured that the Pilgrims Board would work assiduously to replicate the same feat not only during the 2017 Hajj exercise but also the Christian pilgrimage to Jerusalem, Greece and Rome. “The primary essence of government is the welfare of the people whether they are within or outside Nigeria. So the Governor has touched every sector and the people who are of the religious sector are immensely grateful to His Excellency and we thank the Federal Government for identifying with us and we promise that we would not allow these medals to go without maintaining them”, Abdulhakeem said.