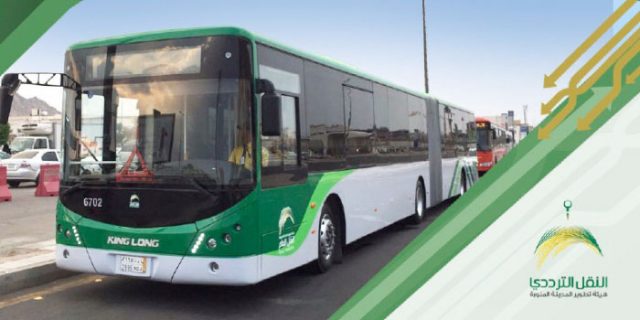 The shuttle service from different parts of Madinah to the Prophet’s Mosque helped reduce traffic jams in the central region of Madinah. — Courtesy photo
The Madinah Development Authority (MDA) has launched the eighth shuttle bus service station at the airport as part of its efforts to facilitate transport of pilgrims and worshippers from different parts of the holy city to the Prophet’s Mosque and back.
“Ever since it was launched in 2012, the shuttle bus service has been successful in providing easy transport to thousands of people visiting the Prophet’s Mosque,” said an MDA official, who commended Madinah Emir Prince Faisal Bin Salman for showing special interest in developing this service.
The shuttle service started five years ago with four stations in major districts with a limited number of buses. “Prince Faisal asked the MDA to provide the service throughout the year after it was found successful.
Previously, it was available only in Ramadan,” the official said.
“We opened a new shuttle service station at Prince Muhammad Bin Abdulaziz International Airport this year,” the official told Al-Madina Arabic daily.
He said the shuttle service from different parts of Madinah to the Prophet’s Mosque has been instrumental in reducing traffic jams in the central region of Madinah and ensuring smooth flow of vehicles, especially during peak hours in Ramadan.
“The service has contributed to reducing the number of vehicles, especially cars, that head toward the Prophet’s Mosque and easing traffic pressure in the central region,” the official said. “It has also reduced environment pollution in the city,” he added.
Speaking about new projects, he said the MDA has introduced special vehicles to transport the elderly and people with special needs to the Prophet’s Mosque. “Earlier this year we launched a new station at Prince Naif Residential City to serve people living there and nearby districts,” he said.
At present, the shuttle service is available from eight stations across Madinah and about 80 buses have been deployed to provide this service. During the first 19 days of Ramadan, the service will be available from 3 p.m. until the end of Taraweeh prayers at the Prophet’s Mosque. In the last 10 days of Ramadan the service will continue until after the Qiyamullail prayer.
The MDA is charging a nominal fee of SR2 for the service from different districts and SR10 for the airport service, the official said, adding that the worshippers can reach the mosque from the airport within 15 minutes. A smart phone app has been developed for people to follow the service.
Saudi Gazette