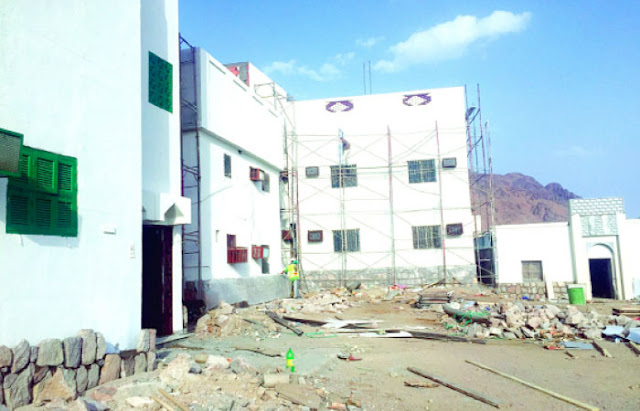 Development work at Martyrs Square in Madinah in full swing. — Courtesy photo
Saudi Gazette
The first phase of a major project to develop the Martyrs Square in the Prophet’s City is nearing completion. The project included development of 45 buildings that peep into the square, an official statement said, adding that it would give the area a picturesque look, Al-Madina daily reported on Tuesday.
Madinah Emir Prince Faisal Bin Salman initiated the project to humanize the holy city by creating places inside Madinah to provide a healthy and human friendly atmosphere.
The project including renovation of pedestrian pathways and development of car parks, bus stands for ordinary buses, shuttle service buses and tourist buses will have positive social, economic and environmental impact, the statement said.
Stalls to sell various consumer goods will also be provided at the square for the benefit of visitors. Areas will be allocated for traders from special need people as well as for families running cottage industries.
“The Martyrs Square will witness the largest development in history,” the statement said. The project design has been prepared in line with the vision of Prince Faisal Bin Salman, who is chairman of the Madinah Development Authority,” it added.
“The project comes in line with government’s efforts to improve services and facilities for Madinah citizens and visitors to the Prophet’s Mosque,” the statement said, adding that various cultural programs would be held in the holy city for the benefit of its people and visitors.
The public transport facilities including the metro will also be used for organizing various events.
A series of new development projects have been planned for Madinah that would not only improve the city’s aesthetic beauty but also ensure smooth flow of people. Date palms around the square will also be protected considering it as an agricultural heritage.
The project will focus on development of buildings as well as enhancing the beauty of the area such as its valleys, the mountain of archers and date palm fields as well as Uhud Mountain, which has its historic importance because of the epic battle that took place in the area.
The Sayyed Al-Shuhada Mosque in Uhud will also be developed to accommodate more than 4,000 worshipers at a time. It will also have a museum to be supervised by the Saudi Commission for Tourism and National Heritage, the statement added.