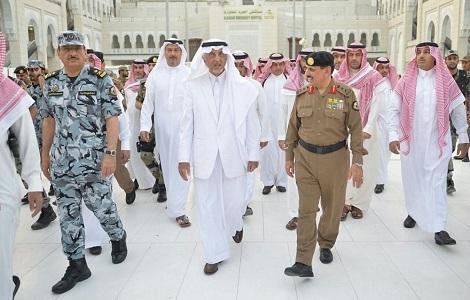 The prince’s statement came after an iftar he held on the mosque premises for security officers tasked with helping pilgrims during the holy month of Ramadan.
A large contingent of security officers and representatives of various government and non-governmental agencies, such as maintenance companies and food suppliers, work round the clock to help local and foreign pilgrims.

“We are more than happy, and keen, to provide all services and facilities to pilgrims who wish to pray and perform religious rituals at the holy mosque,” the prince said.
“I make this annual tour as instructed by King Salman, who is keen on offering the best services to the guests who come to worship in the holy mosque.”

He said he will convey to the king the gratitude of the security men and workers at the mosque for being granted the honor of guarding it and serving pilgrims.
Prince Khaled also thanked the general presidency for the affairs of the Two Holy Mosques for its dedication and hard work in the service of pilgrims.

During Ramadan, the Grand Mosque receives some 2.5 million worshipers, local and foreign, he added.

“This would not have been possible if it had not been for the support given by the security men and the other workers who serve the pilgrims,” he said.
Before the iftar, he was briefed on the security and service plans in place for the last 10 days of Ramadan in the mosque.

Millions of pilgrims from around the world come annually to perform Umrah (the lesser pilgrimage) and attend prayers at the Grand Mosque during Ramadan.
The security detail on duty in and around the mosque can speak various languages, including English, Urdu, French and Persian, to communicate with visitors. Some even know sign language, a security officer said.

Apart from crowd control, security officers offer humanitarian services and organize the movement of worshipers between the western and northern gates of the mosque before and after each prayer.
Arab News