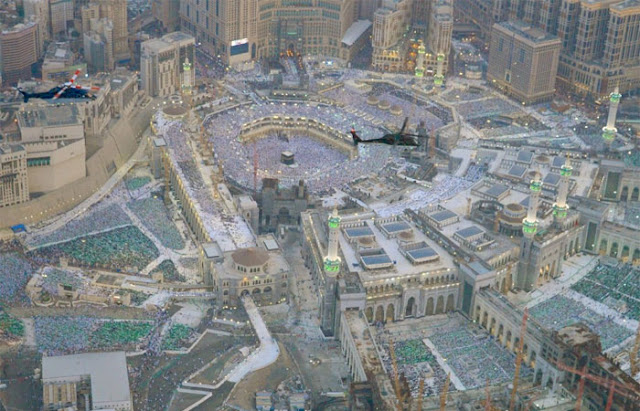 More than 2.5 million worshippers, including foreign pilgrims, performed the last Friday prayer of this Ramadan at the Grand Mosque in Makkah and the Prophet’s Mosque in Madinah.
The worshippers also attended the Khatm Al-Qur’an prayer after the completion of the recitation of the holy book during Taraweeh at the two mosques on Friday night.
The authorities intensified efforts to receive the worshippers who started trickling in since the early morning hours. The courtyards, prayer areas and gates of the mosques were prepared well in advance to facilitate the smooth entry and exit of worshipers and to enable them to perform their prayers with devotion, tranquility and peace of mind. The various agencies worked hard to provide the best services.
Delivering the Friday sermon at the Grand Mosque, Sheikh Saleh Bin Muhammad Al-Talib, imam and khateeb of the Grand Mosque, stressed that “the last deeds are the most important and there are still hours, which might coincide with Laylat Al-Qadr (Night of Power).”
Sheikh Al-Talib said any individual whose life was filled with obedience of Allah would have a good end, while anyone whose life was full of sins has reasons for fear.
Al-Talib said Zakat Al-Fitr is compulsory on all capable people who should pay it on their behalf and on the behalf of all their dependents according to the consensus of the scholars.
Sheikh Abdulbari Bin Awwad Al-Thubaiti led the prayers at the Prophet’s Mosque in Madinah.
In his sermon he urged Muslims everywhere to make the best use of the remaining hours of Ramadan and supplicate to Allah to accept their fasting, prayers, alms and other acts of worship.
Over 500,000 worshipers including citizens, expatriates and Umrah pilgrims attended the Friday prayer at the Prophet’s Mosque in a tranquil atmosphere.
The worshipers, seeking Allah’s mercy and forgiveness, thronged the mosque, its roof and courtyards since early morning.
All floors of the Grand Mosque, its passages, courtyards and basements were full to capacity and the rows of worshippers extended to streets leading to the Grand Mosque.
Various agencies ensured the movement of the faithful at the mosque was streamlined and measures were taken to prevent crowding at its gates.
Copies of the Holy Qur’an and its translations in various languages were made available in sufficient numbers all over the mosque.
Golf carts were seen transporting old and invalid people.
In view of the extraordinary crowds of worshippers, the number of cleaners in the mosque complex was increased.
Makkah Municipality intensified its work especially in areas with a high density of visitors and Umrah pilgrims. They included the central area, malls and shopping districts in the vicinity of the Grand Mosque.
Municipality inspectors made sure that the highest hygiene standards were met in facilities that sell food and water. The municipality had made preparations to deal with the increase in garbage in the areas where Umrah pilgrims and visitors stay.
Police and other security forces were deployed large numbers to maintain security and public order and to organize traffic flow.
The Civil Defense personnel were ready for speedy intervention in case of any contingency.
In Madinah, the Directorate General of Health Affairs kept its personnel and health centers in the vicinity of the Prophet’s Mosque ready to receive any emergency cases.
Madinah police implemented plans to streamline traffic and pedestrian movement. Security men were available round the clock xto serve the worshippers.
Saudi Gazette report