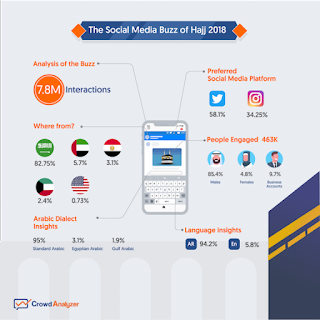 Ministry of Religious Affairs and Interfaith Harmony has planned maximized use of social media for providing prompt information to intending pilgrims of Government Hajj Scheme during the current season.
According to a spokesman of the ministry, the ministry was using Facebook, Twitter for sharing immediate information with the intending pilgrims.
Likewise, five smartphone Apps have also been developed to facilitate intending pilgrims to perform religious rituals with ease and comfort that too in a hassle free environment.
The five smartphone applications (Apps) included ‘Hajj Mua’wan’, ‘Rehnumai-e-Hajj’, ‘Mina Locator’, ‘Pak Hajj Guide’, and ‘Hajj Complaints’, said the spokesman Imran Siddique.
He urged the intending pilgrims to download the apps which provide Hajj-related dua’en (prayers) and other important information about performing Hajj rituals (‘manasak-e-Hajj’).
He said the apps containing documentaries on Hajj performance process and complete guidelines to facilitate the intending pilgrims.
Mina Locator app facilitates the intending pilgrims in case they lose their camp or any other related place. He shared whatsApp cell number 0302-3332555 for contacting with the religious affairs ministry. The queries of pilgrims would be responded promptly.
THE NATION