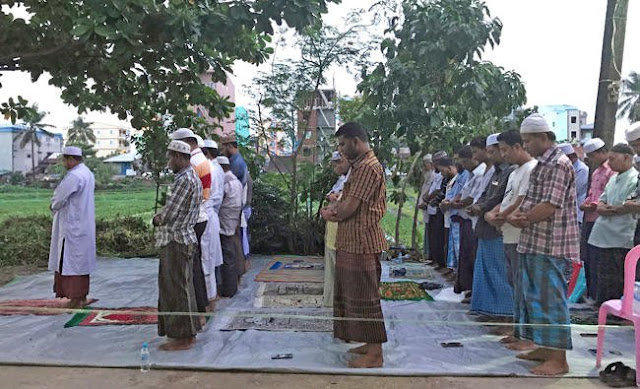 Muslim men pray on a street in Tharkayta area in Yangon, Myanmar, on May 31, 2017. (REUTERS/Shoon Naing)
Huddled under umbrellas to escape a thundering monsoon downpour, dozens of Muslims stood in line at a Yangon mosque for a small portion of rice and curry to break their Ramadan fast.

Many would have normally prayed at Islamic schools that for six decades — most of them spent under Myanmar’s former military government — doubled as a place for Muslims to come together for worship.

But last month the madrassas in eastern Yangon were closed down by a Buddhist nationalist mob, one of a growing number of raids by resurgent hard-liners intent on silencing the maligned minority.

“We have faced more discrimination over the last few years,” said Hussein, who used to pray at the schools.

Nearby old bearded men used wooden paddles to stir steaming vats of daal, which was portioned into metal tiffins with rice and handed to waiting families.
Muslims only make up some 3-4 percent of Myanmar’s population, including the Rohingya minority from western Rakhine State, but the religion traces its roots in the country back centuries.

Now many are feeling unwelcome in their own homeland.

“When I was young there was no discrimination. We were very friendly (with Buddhists), so we would eat at their homes and they would eat at ours,” added Hussein, who like many of Myanmar’s Muslims only goes by one name.
“Now we live in this country and we are not free to practice our religion.”

Aung Htoo Myint, secretary of the mosque in Yangon’s poor Thaketa township, said they had struggled to accommodate the hundreds forced to join their congregation after Islamic schools were shuttered.

Many from the mainly Muslim neighborhood braved the monsoon rains to pray together in the street when this year’s holy month of Ramadan began, but local authorities swiftly banned those gatherings as well.

They have since launched legal proceedings against three people who attended a prayer session, arguing the gathering threatened “stability and the rule of law.”
Bo Gyi, a teacher at the madrassas, said they had been given no details of when the schools would reopen or what would happen to the 300 children who studied there.

“We have written letters to the president and Yangon chief minister as well,” he said, but there has been no reply.

Myanmar has faced growing criticism for how it treats Muslims, who now encounter restrictions on who they can marry and even how many children they can have under the country’s 2015 Race and Religion laws.

Tensions have simmered since 2012 when sectarian violence erupted in Rakhine, killing around 200 people, mostly Rohingya Muslims, and driving tens of thousands into displacement camps.

Since then the hard-liners have become increasingly vocal, shutting down Islamic events, forming a political party to stand in the 2020 elections and clashing with Muslims on Yangon’s streets.

Police have arrested ringleaders behind the violence, while the country’s top Buddhist body has banned prominent ultra-nationalist group Ma Ba Tha — which responded by simply changing its name.

But ordinary Muslims fear they are now becoming targets in their own country.
Haroon, 57, who has spent his whole life in Yangon where he works selling chapatis, says he is increasingly worried about the nationalists.

“There is only one group creating this situation,” he tells AFP inside the house where he lives with his wife and three children, unwilling to say the name Ma Ba Tha out loud.

“If that group disappeared completely, everything would be peaceful.”