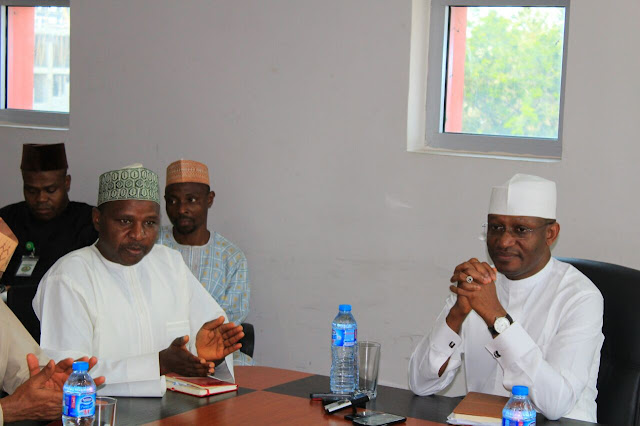 NAHCON  Chairman, Barr Abdullahi Mukhtar during his visit to Media house
By Sani Muhammad, Abuja
The National Hajj Commission of Nigeria (NAHCON), on has reached an agreement with the Media Trust and Leadership Newspaper to embark on enlightenment and orientation for the 2017 intending pilgrims.

The Executive Chairman of NAHCON, Alhaji Abdullahi Mohammad, made the disclosure when he led a delegation to visit the Editor-in-Chief of Media Trust, Malam Mannir Dan-Ali, in Abuja.

Mohammad said that it was imperative for the commission to ensure synergy with media organisations on enlightenment, education and orientation of intending pilgrims through their platforms.

The NAHCON boss noted that the issue of pilgrims’ education, enlightenment and orientation was very central to the function of the commission as clearly stipulated in its establishment act.

He said that the NAHCON Act clearly stated that the commission should educate pilgrims in the 36 states of the federation and the FCT, adding that the act had defined the scope of pilgrims’ orientation.

Mohammed, however, said that it would be difficult for the commission to go round the 36 states to start organising orientation programme for intending pilgrims.
He said that although, the State Pilgrims Welfare Boards and Agencies are doing their best in terms of pilgrims education, the commission, being the regulatory agency had a responsibility to complement their efforts.

According to him, matters of hajj are issues of public and national discourse; NAHCON needs to seek partnership with media organisations to deliver on its mandate.

“ So we believe those areas that we have to bring into the front burners into public courts we need to do so in partnership with media organisations.

“ I will request that let have a team of two persons from your side and two from our side to sit down and see how we can fine tune and move the education of pilgrims to the next level.

“ We also want to use your medium to update the public about what we are doing at the commission,“ Mohammed said.

He said that NAHCON had carried out a major reform on pilgrim’s accommodation, saying “ we can beat our chest that no nation that goes to hajj can compete with us in terms of quality of accommodation in Madinah.

He said that through direct contact with landlord the commission had successfully eliminated agents in Medinah and abolished the regime of uniform price of accommodation in Mecca.

He said that the commission would put into consideration the location, facilities and the proximity of the house to holy site to determine the price of each accommodation.
Mohammed, therefore, assured that no state government would be asked by the states’ pilgrims’ board to augment pilgrims’ accommodation which had been the practice in the past.

“ With the reform, we have successfully bring an end to the regime of governors being put under pleasure to use public fund to augment pilgrims accommodation,“ he said.

Responding, the Chief Executive Officer and Editor-in-Chief of Media Trust, Dan-Ali, assured the commission of the readiness of the organisation to use its various platforms to assist NAHCON to educate and enlighten pilgrims on hajj rite.

“ It is my pleasure to welcome you to the Media Trust and I assure you our cooperation to assist the commission discharge it responsibility, Dan-Ali said.

Similarly, the NAHCON boss and his team paid a courtesy call on the Group Managing Director of Leadership Newspapers, Mr Abdul Gombe and solicited his support to ensure hitch free 2017 hajj operation.

The NAHCON boss said that as part of the ongoing reform of hajj operation, the commission had directed all state pilgrims boards to establish pilgrims’ orientation centre.

Gombe commended leadership of NAHCON for reforming its operation, which had contributed immensely to the successful outcome of the 2016 hajj operation.
Umar also restated the determination of the organisation to build on the existing relationship with the NAHCON to ensure the success of its ongoing reform.