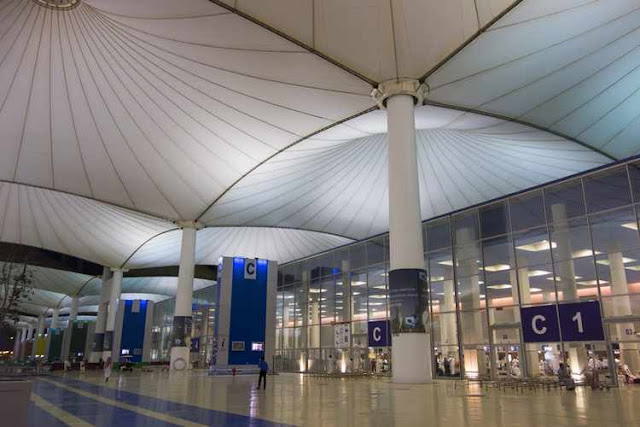 Foreign pilgrims coming for Umrah during the holy month of Ramadan are leaving the Kingdom regularly without fail and the Ministry of Haj and Umrah has not noticed anyone of them overstaying their visas, said a senior ministry official.
“As many as 14,500 pilgrims leave the Kingdom daily after performing Umrah rituals and praying at the Prophet’s Mosque in Madinah and most of them have left through Jeddah airport,” said Abdul Aziz Damanhouri, assistant deputy minister for Umrah pilgrims’ affairs.
He said an automatic system introduced by the ministry in coordination with relevant government departments, which blacklists Umrah service companies having more than five percent overstayers, was successful in bring down the number of illegal pilgrims.
“This system has forced Umrah service companies and establishments to send back their pilgrims before the expiry of their visas in order to get new visas and avoid punishment,” Damanhouri told Al-Madina Arabic Marwan Shaaban, owner of an Umrah company, said all pilgrims leave the Kingdom as per their flight schedules. “We have appointed representatives in Makkah and Madinah to make sure Umrah pilgrims leave the Kingdom before the expiry of their visas,” he said.
“We follow the departure of pilgrims at King Abdulaziz International Airport in Jeddah and Prince Mohammed bin Abdulaziz International Airport in Madinah to get new visas and stay in business,” he added.
He said Umrah companies carry out marketing of their package programs through their agencies in foreign countries. “We receive pilgrims at airport and provide them with all facilities and see them off at airport after performing Umrah rituals,” he pointed out.
Talaat Tunsi, owner of another Umrah company, said the Ministry of Haj and Umrah has been successful in eradicating the phenomenon of pilgrims overstaying their Umrah visas by linking the issuance of new visas with the departure of pilgrims who have already arrived in the country.
“This has encouraged licensed Umrah companies to seriously follow the departure of their pilgrims more than before in order to stay in business. Pilgrim service is a partnership between the ministry and Umrah companies for the welfare and well being of the guests of God,” he explained.
Saudi Gazette