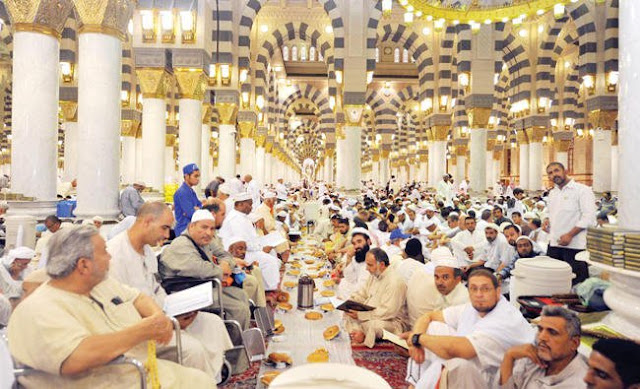 Hundreds of Muslim worshipers reading Qu’ran and waiting to break their fast at the Prophet’s Mosque in Madinah on Saturday. (SPA)
The Presidency of the Two Holy Mosques announced the number of mutakifeen — those who seclude themselves in the Prophet’s Mosque for the last 10 days of Ramadan — numbered 13,575.

Of this number, 11,432 are men and 2,143 are women, according to an undersecretariat official, Saud Al-Saedi, who was quoted by the Saudi Press Agency (SPA).

Three areas have been designated for men and one for women. Both areas are provided with trained employees and technical equipment, he said, adding that all stayers are registered within an electronic system. There are rules that must be followed, such as keeping the area clean, not disturbing other worshipers, not damaging the mosque walls and furniture, and ending their stay by the end of Isha prayer, the night of Eid Al-Fitr.

Al-Saedi said that next year, those who plan itikaf at the Prophet’s Mosque — from within and outside the country — can register online and receive cards before they arrive at the mosque.

SR250,000 for a suite in Makkah
In Makkah, the price for a 10-day stay in a five-star, Haram-overlooking suite is SR250,000 ($66,664), while prices start from SR40,000 in hotels around the Grand Mosque but not overlooking it, according to an Al-Eqtisadiah report. Lower hotel prices are found in more distant areas.

The Emergency Forces Department in Madinah is operating under directions from the king, crown prince and deputy crown prince regarding visitors to the Two Holy Mosques. During the last 10 days of Ramadan, the department’s Prophet’s Mosque Force continues to organize and handle the masses, grouping them on the basis of capacity, from Al-Salam Gate to the Holy Rawdha, and then to the Baqeea Graveyard Gate, said Commander Col. B’jad bin Majed Al-Harbi.

He said the number of worshipers will significantly increase in the last two days of Ramadan and more staff will be deployed to prevent people from blocking walkways.
ARAB NEWS