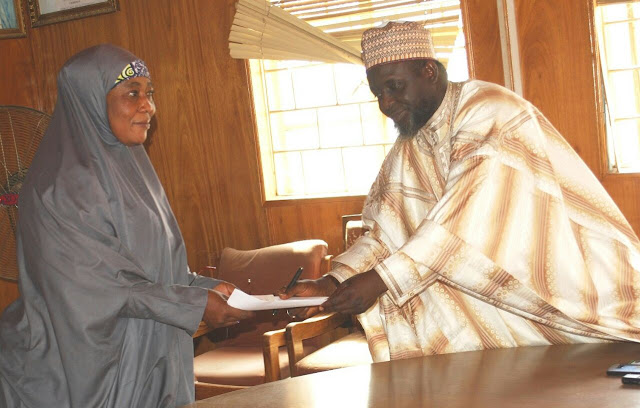 The Overseer, Imam Hussaini Tsoho, handing over the cheque to Haj Amina Abdullahi Gele
Hajj Reporters
A female pilgrim who returned a lost Basic Travel Allowance ,BTA, of $750 she found in an unmarked envelope at a Hotel bathroom during the 2016 Hajji pilgrimage to the owner has received a N100,000 cheque reward from a Kaduna-based philanthropist.
Amina Abdullahi Gele, the pilgrim from Igabi Local Government of the state, who found the BTA in Medina, Saudi Arabia, said the envelope was left in the bathroom and she had difficulty in identifying the real owner, who happens to be Hauwa Musa, an aged pilgrim also from Igabi LGA.
Mrs. Musa, who expressed shock at the time, said she had given up on the money after searching everywhere. “I never imagined there are God fearing people like Hajia Amina, because there was no form of identification on the envelope,” she had said.
While presenting the cheque to Mrs. Gele, on Wednesday at the State Pilgrims Board’s office in Kaduna, Imam Hussaini Tsoho, the Board’s Overseer, also said only those with good heart and fear of Allah will return such a huge amount of money to the rightful owner.
“What you displayed during the 2016 hajj exercise in Saudi Arabia, only Allah can reward you because it is not easy and people like you are few in the society,” he said.
Mr Tsoho said it is a well known fact in Islam that, who ever found a lost item inside the two holy mosques in Makkah and Medina, must return it or else his/her Hajj will be nullified.
He said pilgrims are also enlightened to understand that when they come across any lost item within the two holy mosques premises or anywhere in the holy land, it should be returned to officials who will help locate the rightful owner.
“So, we in Kaduna Pilgrims Board are proud of you (Hajiya Amina) for returning the money to the owner through the board.
“I urge intending pilgrims from the State to emulate your behaviour so that we will continue to be our brothers’ keeper. Please keep up the good work and May Allah reward you abundantly,” the Pilgrims Board’s boss added.
He commended the philanthropist, Ibrahim Sambo Magnet for giving Mrs. Gele the reward, despite the fact that the money found didn’t belong to him or any of his relatives.
Mrs. Gele, while appreciating the reward, advised intending pilgrims to attend the ongoing enlightenment programme in their respective LGAs and to take the lessons given there very seriously.
She also called on pilgrims to be good ambassadors of the state, be their brothers’ keepers,  and ensure safe keeping of their money and personal belongings.